Home » Reviews » What “She” Said Family Swap Your Ride
As an Amazon Associate I earn from qualifying purchases.

“This is hopefully one of many post in our “He” said “She” said series. We are giving you opinions from both the male and female perspective.”

I had intended on having this post up much sooner but then a little thing called BlogHer12‘, New York, and Family Vacation got in the way. Sometimes we have to leave our responsibilities behind and enjoy our lives! Traveling has become a new thing for the Shibley family. We have been doing much more of it in the past two years then we ever have before. While this past trip involved airline transportation much of our traveling is done locally and in a car. So when we were asked to join a test drive team we thought it would be fun. Even better we thought it would be great to give both the male and female view point of each vehicle.

The 5 door compact Kia Rio was delivered right to our door! My husband was home at the time as I was once again out of town at the School Nutrition Association National Annual Conference. He got the run down of all the cool features and I got to play with them. 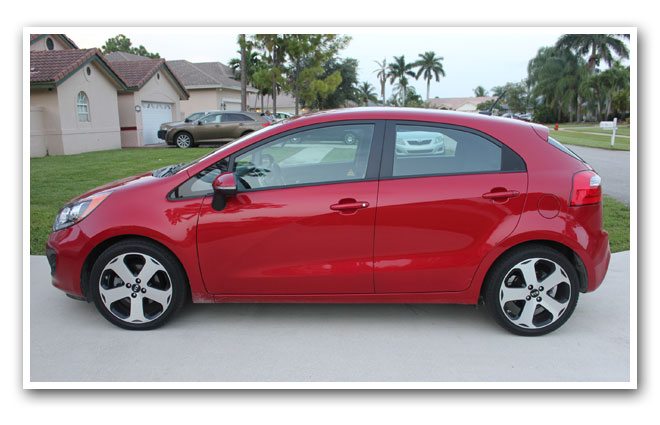 First off I love the color. Yeah this is a simple thing and cars come in an array of colors but I do love this color read. While my husband noticed the wheels and headlights I honestly couldn’t tell you a thing about them LOL. My favorite part of the car was all the fun electronic controls and gadgets. I have mentioned I’m a tech geek several times! The back up camera is a new feature for me and I think it is a great feature. It should not take the place of peering out your window to both the left and right but I think it is great to make sure no animals, little people, or objects are behind your car. 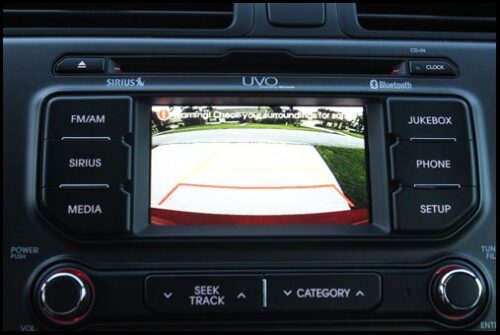 I went ahead and took the liberty of connecting my cellphone to the blue tooth to check out how well it worked. I was able to do it in seconds with NO instruction manual that is a huge plus. I have Ford Sync in my car and love the feature but I can honestly say that the Kia UVO system put my sync system to shame. It could clearly hear each and every command I gave it, which doesn’t always happen in my own car. I LOVE the Digital Jukebox feature. I believe my husband would also love this feature if he knew what it did!

When it comes to how the car drove I found it to be satisfactory. It is hard to compare my current car which is a six cylinder with the 4 cylinder Kia Rio. However it got me to from point A to point B just fine. The inside of the car was a complimentary grey color and look nice. I personally would opt for leather seats because I’ve been spoiled but the seats were a nice fabric. 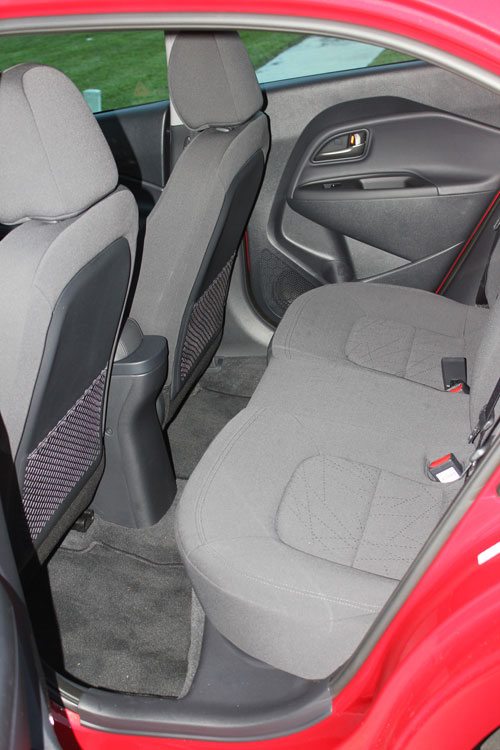 The Kia Rio SX is equipped with a USB jack, Aux jack, and two 12V jacks. I think this is important in a car. I often use many of these at one time. Charging my phone, iPad, and sometimes the boys gadgets as well. They are in an easy to get to spot right under the front dash.

There is a cup holder in the middle of the car (it appeared a little small) and a compartment under the arm rest for small items such as sunglasses, CDs, chargers, etc. Things I believe all cars should have.

The Not So Cool

Every car has its positives and negatives so it wouldn’t be fair to say this car had everything and lacked nothing. For me there was just one issue I couldn’t get over. That issue was the inability to see very well when trying to pull out into traffic or having to look over my right shoulder. I believe the fact that it is a hatchback and the windows are small I just had a really hard time seeing enough of the road to see what was coming.

Of course as any mother or woman would immediately check out…the trunk space. There definitely isn’t a ton of space, however it does fit with the rest of the car.

Overall what makes the Kia Rio SX a good deal is  the features. I love my own car due to the features and for me it is what makes a car stand out.  The car is too small for my family of five but I think would be great for a teenager (like my son), a couple, or a family with a new baby or one child. For these group of people the price is well worth the car you will get in return!

Disclaimer: We received this car to test drive for one week from Drive STI. Opinions are my own and NOT influenced by monetary compensation. You may read more of my disclosure here.

« Kiwi Crate : Busy with Bugs
Let Freedom Ring: A Glimpse at the Soul of New York »