Home » Blog » Corny and Funny 4th of July Jokes
As an Amazon Associate I earn from qualifying purchases.

My nephew is the teller of all jokes corny. Of course because he is only 5 years old is the cutest thing. So today as we prepare for a barbeque at his house in honor of this patriotic holiday this post is for him! So bring on the corny jokes dude! If you missed it I posted 4th of July Inspirational Quotes yesterday 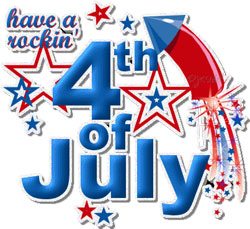 Q: Did you hear the one about the Liberty Bell?
A: Yeah, it cracked me up!

Q: What did one flag say to the other flag?
A: Nothing. It just waved!

Q: Where did George Washington buy his hatchet?
A: At the chopping mall!

Q: What was General Washington’s favourite tree?
A: The infantry!

Q: What did King George think of the American colonists?
A: He thought they were revolting!

Q: Why were the early American settlers like ants?
A: Because they lived in colonies.

Q: Teacher: “Where was the Declaration of Independence signed?”
A: Student: “On the bottom!”

Q: Did you hear the one about the Liberty Bell?
A: Yeah, it cracked me up!

Q: Why did the British cross the Atlantic?
A: To get to the other tide!

Q: What happened as a result of the Stamp Act?
A: The Americans licked the British!