Home » Reviews » Alvin and the Chipmunks : Chipwrecked for Kinect Review
As an Amazon Associate I earn from qualifying purchases. 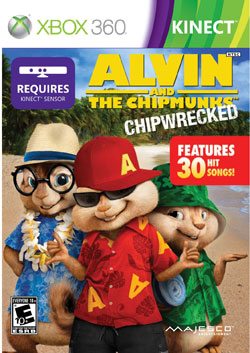 The Alvin and the Chipmunks: Chipwrecked video game features include:

Sing and dance as any of The Chipmunks and The Chipettes–Alvin, Simon, Theodore, Brittany, Jeanette and Eleanor. Perform more than 50 different dance moves to electrify the crowd with your on screen performance.Customize your Chipmunk before you hit the stage by choosing from a huge range of styles and accessories.   Experience the movie in Story Mode with environments inspired by the film.    Hear your voice “Alvin-ized” during your on-stage performance using the Kinect for Xbox 360.

Overall Honey and I thought the game was cute and somewhat fun but borderline repetitive. I find the game a great game to pop in when I don’t want to think or compete and just want to have a little fun. The game begins with a somewhat lengthy questionnaire regarding your personality. Based on your answers the game will pick the perfect chipmunk for you. The game selected Eleanor for Honey but she was not happy and quickly switched to Brittany. The co-op setting has you taking turns busting the moves. I personally would love to see the co-op be a side by side play where both players can play at the same time.

The dance moves are elementary and perfect for younger children. My daughter is 6 and I believe the moves were perfect for her, she still had a little trouble getting the “excellent” status so I know they were not too easy. There is a selection of 30 songs but truthfully I wish they were a little more up to date. Though I’ve heard of “Beat It” neither my daughter or even my boys know the song. I would love to see some Black Eyed Peas, Bruno Mars, and more current artist to chose from.

The earning of trophies is nice, it is always fun when you have something to strive for. You also earn points in which you can purchase items for your chipmunk which is another feature we liked. Overall the game is cute and a fun relaxing game unlike many games you find on the market these days. However it is not a game you will find yourself lost in for hours. It is a great game for parents to play with their small children, simple enough for young children and dare I say adults as well!

Price: The price currently at Amazon.com is $39.99. We find this price below average. Considering the audience and simpleness of this game we would expect to find it more reasonably at $19.99

Age Recommendation: We recommend this game for ages 4-7 depending on your childs dancing ability. If they are more advance we recommend a harder game, however if your child just enjoys having fun and trying to follow along this is a perfect game for child and parent to enjoy together.