Home » Lifestyle » Entertainment » Video Games » Alvin and the Chipumunks : Chipwrecked for Xbox 360, Wii, and Nintendo DS
As an Amazon Associate I earn from qualifying purchases. 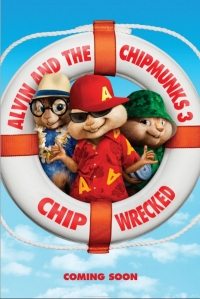 Prepare for a musical dance off with The Chipmunks™ and The Chipettes™ just ahead of the next exciting movie, Alvin and the Chipmunks: Chipwrecked, in theatres December 16th

Edison, NJ, July 7, 2011—Majesco Entertainment Company (NASDAQ: COOL), an innovative provider of video games for the mass market, Twentieth Century Fox Consumer Products and Bagdasarian Productions announced today plans to release the Alvin and the Chipmunks: Chipwreckedvideo game based upon the third installment of the blockbuster animated feature film franchise that will hit theatres December 16th, 2011.  Launching this November, the video game lets you sing and dance along with the film’s stars Alvin, Simon, Theodore and The Chipettes (Brittany, Eleanor and Jeanette), in an immersive motion-based experience. The Kinect™ for Xbox 360® version tracks full body dance moves as players control their Chipmunk on stage, and plays back their “Alvin-ized” voice as they sing along.

“The Alvin brand has proven to be evergreen with universal awareness and growing appeal,” said Jesse Sutton, CEO Majesco Entertainment.  “The extensive customization and combination of dancing and singing to contagious Chipmunk music will deliver a full-featured experience based on the upcoming movie that the whole family can enjoy together.”

“This game will bring fans even closer to the fun and music of Alvin and the Chipmunks by taking full advantage of the Kinect for Xbox 360,” said Gary Rosenfeld, Senior Vice President, New Media for Fox Consumer Products. “It’s going to be the perfect complement to the upcoming film and we know that fans are going to love it.”

The forthcoming Alvin and the Chipmunks movie finds the trio vacationing aboard a luxury cruise liner, turning it into their personal playground, until they become ‘chipwrecked’ on a remote island. The Alvin and the Chipmunks: Chipwrecked video game continues the story with an around-the-world journey that has The Chipmunks visiting six tropical locations inspired by the movie.  Hear your voice “Alvin-ized” when you sing along with the game and unleash your “Munk Power” to perform ultra-cool dance moves.

The Alvin and the Chipmunks: Chipwrecked video game features include:

Sing and dance as any of The Chipmunks and The Chipettes–Alvin, Simon, Theodore, Brittany, Jeanette and Eleanor. Perform more than 50 different dance moves to electrify the crowd with your on screen performance.Customize your Chipmunk before you hit the stage by choosing from a huge range of styles and accessories.   Experience the movie in Story Mode with environments inspired by the film.    Hear your voice “Alvin-ized” during your on-stage performance using the Kinect for Xbox 360.

Developed by Behaviour Interactive, Alvin and the Chipmunks: Chipwrecked is expected to launch on Kinect for Xbox 360, Wii™ and Nintendo DS™ this November

« Spy Kids: All the Time in the World Nintendo DS Game
Pigs Are Flying Today! »