Home » Lifestyle » Everything Else » AT and T Customer Service at a High
As an Amazon Associate I earn from qualifying purchases.

You might remember my rather unfriendly post regarding some recent customer service I encountered at Panda Express: Panda Express Customer Service at a Low. I also mentioned in that same post that I try to compliment as well as complain something a lot of us tend to forget to do. So today I want to tell you of my continuing experience with AT&T.
Now I have heard good and bad about every cell phone carrier out there. So remember this is my own experience with AT&T. We have been with AT&T since 08/2003. Have never switched and never thought about switching. Why? Because they have ALWAYS given me stellar service. I have had to call them on several occasions either with a problem or question and they always seem to go above and beyond.
I’m gong to give you three great examples:
One: My mother in law was on our plan and decided to get off of it because we had no more rollover minutes and we didn’t want to increase our plan. (We have a plan from 7 years ago and if we change it we will never get back to the rate we have). She was ASSURED when she got the new plan that all was taken care of at AT&T. However when I called them they told me what I feared because the line was canceled early there would be a termination fee. They worked with me for hours and days trying to get her line back, to no avail. Sure enough I ended up getting charged the fee. I called them up and without hesitation they took the fee off and canceled the line free of charge. They were wonderful working with me trying to correct an error caused by the  Wal-Mart clerk misinforming my mother in law on how the contract worked.
Two: This past Christmas my husband wanted to get a new phone and we were just shy of the upgrade time frame by about three weeks. I called anyway hoping that because it was close to Christmas they would work with me. Sure enough they did. On top of that I mentioned something about upgrading my boys phones in March when their upgrade time frame came about and she asked me if I wanted to do it today instead. So I was able to get both of the boys new phones for Christmas. Not only that but she called me back the following day, for what I can’t remember. AT&T is always scheduling follow up calls to make sure your problem was solved and they always follow through.
Three: This one is exciting let me start with a photo. Let me introduce you to my new love. 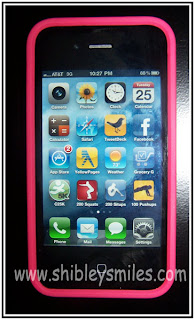 Yep I got a new iPhone 4 last night and can I say “LOVE IT“. However that has no bearing on the customer service. I actually called AT&T to ask what the $15/rate plan was vs. the $30/rate plan I have. (I’m staying with $30 it is unlimited). I told him I wanted to get a new iPhone and that I hope I wouldn’t have a problem because I was upgraded my husbands line to get the new phone but the phone was going on my line. Not a problem he says. So I say I’m going to the Apple Store tonight to see if I can purchase one (I HATE going to the Apple Store so chaotic). He said he could help me find an AT&T store. So he called 5 different stores until he found one that was open past eight and had an iPhone in stock. He gave me the employees name and said just ask for him when I go into the store and he will make sure the phone is put on the right line. Now of course they want to sell me a phone, and the guy did try to sell me every accessory under the sun and everything was important, but the customer rep on the phone did not have to go through the length’s that he did to find me a place. I was very please and I am SOOO happy to have my new phone. Look for an iPhone 3GS shortly on eBay (to help pay for the new one).

So here is a good compliment to offset my complaint earlier. Do you have any companies that just make you feel like you got great service?