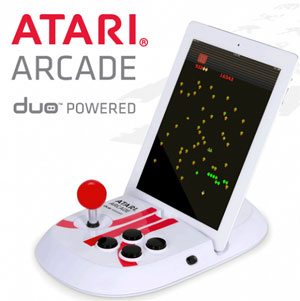 When Discovery Bay Games contacted me about reviewing one of their iPad games I was definitely interested. I remembered meeting with a rep at BlogHer 11′ and thought it was an innovative and fun idea. At the time I didn’t have and iPad, however things have changed, and changed again since then. Forgive me for no “personal” photos on this post but as you read you will find out why.

The boys were excited when the Atari Arcade Duo arrived. They thought the idea of hooking up the iPad to a joystick and playing some “old” games was “cool”. When the game arrived we immediately downloaded the entire game pack of 99 games for 9.99. Despite the number of games and choices the Atari Arcade stayed on one game only, Centipede (or maybe Millipede). The boys LOVE this game and couldn’t tell me enough how cool it was.

The Atari Arcade really is a fun and unique accessory to your iPad. There were a few games I was really hoping for but chances are they were not made by Atari. I’ve played Centipede with the boys a few times and it is addicting. I think this would be a great holiday gift for someone who owns an iPad and loves old Atari games. 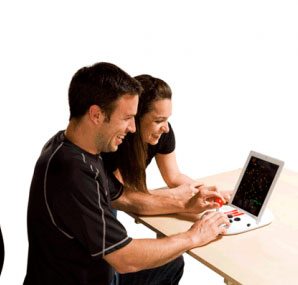 Relive the fast-action excitement of all your arcade favorites, like Asteroids, Centipede, and Missile Command.

Simply connect your iPad to Atari Arcade, download Atari’s Greatest Hits app for Duo, and you’re ready to share the fun with family and friends anywhere! With its joystick and buttons, Atari Arcade—Duo Powered is exactly the way arcade games were meant to be played!

Now I still haven’t made sense of my comment about the “no photos”. The reason I have no photos is because in order to play the Atari Arcade we had to take the iPad out of the case we were using at the time. After playing with it one of the kids  set the iPad on my dining room table. On top of an empty box. On the corner of the table. One morning in a hurry I went to grab my daughter’s backpack (that was on the dining room table). I didn’t notice the iPad was there and when I grabbed the backpack it hit the iPad flipping it over and it fell screen side down on the tiled floor.

I didn’t even need to look to know what I was going to see when I flipped it over. I should have taken a photo but it would have been an ugly reminder of my error in not requiring the children to put the iPad back in its case. After some discussions with my husband we both agreed it was worth replacing. My iPad that originally cost me $0, because I won it. In the end cost me a total of $269 + tax the replacement cost.

Now the great thing is even with the new case on (Otterbox) we can still continue to play the Atari Arcade, we can’t lock it in place but it can be played. However because the iPad broke I was unable to back it up before I had it replaced. When my son plugged in the iPad we were prompted to purchase again the 99 games. I have yet to spend the money once again to purchase the games.

So since our little mishap we have not played the Atari Arcade, however we wanted to post this review for the holidays because we feel it would be a fun and unique gift.

« Memories of Christmas Past
The Most Stressful Christmas Songs »