Home » Lifestyle » Entertainment » Beauty and the Beast Diamond Edition 3D
As an Amazon Associate I earn from qualifying purchases.

BEAUTY AND THE BEAST: DIAMOND EDITION 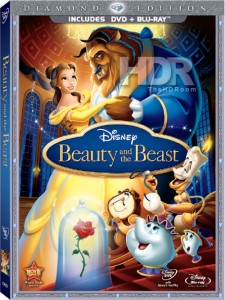 This Release Will Be Followed By Two Special Edition Releases on November 22, 2011 –

BURBANK, Calif., June 9, 2011— The Walt Disney Studios today announced plans to release one of its most critically acclaimed animated films of all time, Beauty and the Beast, for the first time ever in mesmerizing Disney Blu-ray 3D™ for in-home viewing.  Beauty and the Beast: Diamond Edition 3D will be available in market beginning on October 4th as a 5-Disc Combo Pack (providing families with value, versatility and flexibility to enjoy this film on several formats of choice including Blu-ray 3D, Blu-ray™, DVD and/or Digital Copy) and/or 3D Movie Download. For more information, please visit www.disney.com/BeautyAndTheBeast3D.

The same Disney classic that taught us beauty is found within, now comes to life in spectacular Disney 3D bringing the characters, sound, and storyline to a whole new immersive dimension. Fans can once again meet and enjoy their favorite characters – Belle, Beast, Lumiere, Mrs. Potts and more – in an entirely new fashion as if they were watching the film for the very first time.

Those who want to stay connected with what’s happening with the upcoming Beauty and the Beast 3D release are encouraged to:

dented quality, value and portability of their favorite Disney films, in 2008 WDSHE pioneered the Combo Pack – a Blu-ray Disc plus a DVD and in some cases a Digital copy of the movie in a single package.  Current Disney films available in market as Combo Packs include Gnomeo & Juliet, Tangled, Sharpay’s Fabulous Adventure, TRON: Legacy, Beverly Hills Chihuahua and Bambi Diamond Edition.

« For the Love of Pizza!
Beauty and the Beast The Enchanted Christmas Special DVD »