Home » Lifestyle » Entertainment » Movies » Behind the Scenes of Prom From Disney
As an Amazon Associate I earn from qualifying purchases.

BEHIND THE MAGIC!
With the Blu-ray and DVD of Disney’s film Prom coming out soon, we went behind the cameras to bring you the lowdown on the new fun and original film that immerses audiences in the journey of a group of high school students as they learn the complex truths of growing up, balancing relationships and enjoying the most memorable time of their lives.

PROM QUEEN…
“People thought we were creating a new High School Musical when we started work on the film, but Prom is completely different,” admits actress Aimee Teegarden. “Prom is a classic, timeless story where the characters don’t burst into song and dance numbers.”

DRAMA CLASS…
The film’s casting team spent four months scouring the world for the perfect actors to star in the movie. “The casting process was really long, but it was a lot of fun,” reveals Prom’s director, Joe Nussbaum. “We looked at thousands of kids, but we eventually discovered the perfect people for the various roles in the movie.”

STARS IN THEIR EYES…
More than 200 extras had to be kitted out in prom outfits for the film’s finale scenes. “The theme of the prom in the movie is ‘Starry Night’,” explains actress Aimee Teegarden. “The crew decorated a school hall with lots of stars, moons and shimmering lights for those scenes. The room looked magical and beautiful!”

KEEP IT IN THE FAMILY…
All of the actors immediately clicked as soon as they started filming. “The cast got along really well,” admits Cameron Monaghan. “We hung out together off set, as well as on set. We would go to dinner together and watch movies together… We became a family that didn’t want the film shoot to end!”

FILMING FUN…
It took 30 days to shoot all of the action in Prom. “The story is set in a fictional Michigan school called Brookside High School,” reveals producer Justin Springer. “Want to know a secret? We used four different schools in Los Angeles to stand in for Brookside!”

GRUB’S UP…
On the set of the school drama, the cast and crew snacked on healthy treats including fruit, raw vegetables and dips, as well as warm cheese quesadillas. “The food was amazing,” reveals actress Danielle Campbell.

COOKIE TIME…
The acting gang didn’t always stick to healthy food on the set. “Every day, a lady from the catering department would wander around the set with warm chocolate chip cookies,” admits Aimee Teegarden. “They were awesome! Everyone would have to take at least one warm cookie. It was bliss.” Mmmm! 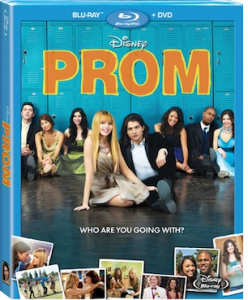 MEET THE CAST!
Discover the famous faces behind the movie’s characters…

THOMAS MCDONELL
“I play Jesse Richter in Prom. Jesse is a loner and he’s a bit of a rebel – but he’s nothing like me in real life. He’s a complicated guy because he has a lot of issues at home.”

AIMEE TEEGARDEN
“I play Nova Prescott in the movie. Nova is in charge of the school prom and she takes her role very seriously. She likes everything to be perfect – but it doesn’t always work out that way.”

NICHOLAS BRAUN
“My character is Lloyd and he spends most of the movie trying to get a date for the school prom. He’s pretty invisible at school, but he’s a romantic at heart and he provides a lot of the comedy in the film.”

DANIELLE CAMPBELL
“I play a very down-to-earth girl named Simone Daniels in Prom. Simone is a free spirit who loves music and playing the guitar – and she’s very similar to me in real life. I’m down to earth, I love music and I’ve started to learn the guitar, too!”

JARED KUSNITZ
“I play a guy named Justin Wexler in the movie. Justin is a sweet, smart and loyal guy who is besotted with his girlfriend at school. Their relationship has a lot of ups and downs during the movie – but ultimately things work out for the best.”

JANELLE ORTIZ
“My character is the gossip girl of the movie. Her name is Ali Gomez and she knows everything about everybody in her school. She knows all the drama and all of the details – and she was so much fun to play.”

DE’VAUGHN NIXON
“Tyler Barso is the name of my character in Prom. Tyler is the most popular guy in school. He’s smart, charismatic and he’s the captain of the lacrosse team – but he’s also a self-absorbed charmer who finds himself in trouble!”

KYLIE BUNBURY
“My character is the most popular girl in school. Her name is Jordan Lundley and she is the head cheerleader. Movies usually portray cheerleaders as mean girls, but Jordan is very different. She’s a really sweet girl.”