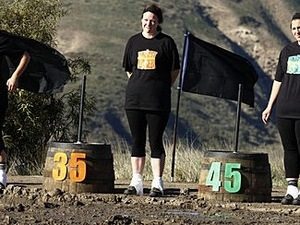 Sorry I know I’m a week behind and you probably JUST finished watching episode 11 I’m trying to catch up as fast as I can. This week’s excuse “I Can’t Get Out of my Comfort Zone”. To drive home the excuse Bob and Dolvett were forced to switch teams for one week. Dolvett trained the black team will Bob trained the red team. The trainers were giddy the contestants not so much.

This week found us watching a little more then some upset contestants, this week we saw the game playing emerge. This is natural and when money is on the line and the title of “Biggest Loser” is at stakes the cat claws come out. This week some of the women made a bold move to try to secure an alliance.

Switching of Trainers: I personally thought it was a great idea! I think it is great to shock your body and do something different. A work out is a work out no matter who is training you.

The Whining: I can not get over how the black team whined and freaked out about the switch. The red team wasn’t any happier but adjusted and moved on. At this point in the show everyone’s confidence level should be higher and your trainer, though important, should not matter nearly as much as the workout itself.

The Girls Alliance: Kim, Emily, Cassandra really? Conda? You choose Conda of all people to try to align with? There must me something going on in that house that we are not seeing because it was as plain as black and white that, that choice was not the right one. Asking her to vote off of all people her brother? I truly believe that this move was the downfall for Cassandra

Emily: Emily emerged as my favorite player a week or so ago and I would love to see her win. She may have put herself in a bad situation but hopefully with the switch up next week she will be back to square one. I think that Emily is beautiful and  just needs a little bit more time to get over the hump, she seems just a little too worried still to leave.

Cassandra Leaving: Once my favorite I have to say her “freaking out” all the time got on my nerves eventually. I love her spirit and I hope she continues to do well, as I said above I think her move to solidify an alliance to early is what caused her being voted out. I really think that Chris should have went first, not because she gives less of an effort but her attitude is just a little negative at times.

One on One: Next week the contestants switch from teams to individuals. Let the games begin!

So who are you hoping wins?

« You Know You Live in Florida When….
Free Silly Strawberry Toothpaste Sample : All Natural Kids Toothpaste »