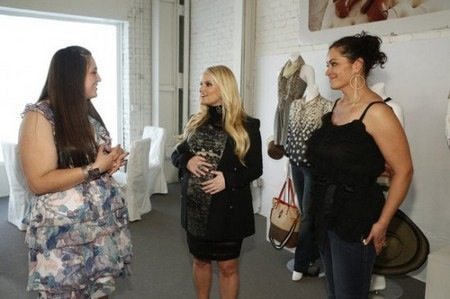 This weeks Biggest Loser was a fun episode with a little less drama. I wouldn’t say dramaless but not quite as much as the usual Biggest Loser Season 13 is prone too. After Cassandra’s vote off last week the contestants were informed there would no longer be “teams”, they were going to individuals. Unfortunately for Kim this put her in a less then perfect position. Emily already not in the best of positions didn’t fair much better. The previous pink team was definitely on the “outs” and it was evident in the challenge. The first individual challenge pitted each contestant against each other in a battle against your opponent over a slippery bed of ice. At the end of the challenge a game of White Elephant.

After an even playing field and the contestants getting no where Conda decided to ditch her own efforts and help her brother propelling him into first place. After this effort the contestants began banning together to help each member leaving two team members to battle it out, Kimmy and Emily. Surprisingly to many Kimmy managed to beat out Emily. The White Elephant gifts ranged from $1, a goldfish, to a pound advantage and a shopping spree with a celebrity.

Tension in the House: Honestly I was surprised this week regarding some of the alliances and more so the non alliances. I had no idea that Kim was on the outside of the red team nor did I know how close she was to Emily. Though they roomed together I didn’t notice the bond. Kim has not been one of my favorites however Emily is.

Jeremy’s Choice: Despite my feelings for Conda I thought it was so touching to see Jeremy give his prize to his sister (the celebrity shopping trip), though I have to wonder if it was the phone or pound of advantage would he have been so willing. Honestly? I think yes, I believe he still would have given the prize to his sister.

Conda’s Choice: I have to say I was surprised and it gave me a little faith in Conda when she choose to take Kim with her on her shopping trip. In retrospect I think she was closer to Kim then I thought but I did like that her decision was based on them being single moms and never getting a day to themselves. I thought this episode we saw Conda in a different light.

Emily’s Exit: I was not happy that Emily was voted off. She was my favorite and who I wanted to win so I’m sad she left. I was also a little nervous about her state of mind if anyone can beat up on themselves it is Emily. I hope to see her at the finally slim and confident.

Olivia’s Part: As a side note I love to see the contestants benefiting from their time on the ranch in door it opens. I believe talent is a must, desire is needed, but sometimes it is who you know that can help you get that foot in the door.

Overall I thought the episode was a good one and I look forward to a little less drama and some individual personalities to emerge. As always I’m also looking forward to my favorite episode when it finally rears its head, the MAKE OVER. I don’t recall seeing previews for the next episode so I’m wondering when that will take place.

Update: I guess we just missed the previews because it does appear to be on this week. YEY!

« My Meaningful Beauty Update
Get A Smile! Feature Your Child in People and Parents Magazine »