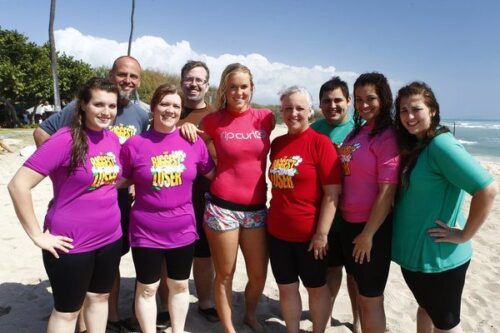 Surprised to see an update so quickly from me? With the boys on spring break we are back to our regularly scheduled program watching. So tonight we sat down and watched this weeks episode of Biggest Loser. This weeks excuse “I can’t lose weight when I’m on vacation!” Honestly I don’t know too many people that try to lose weight during vacation. Usually the focus is just not to GAIN weight.

The contestants were flown to Hawaii to test the excuse and to continue to try to lose weight while on vacation. The scenery and backdrop looked amazing. I’ve always wanted to visit Hawaii. The contestants were tested with a little trivia for a pop challenge with the winner given a one pound advantage at the weigh in. In a tie breaker between Kim and Chris, Chris pulled a head to take the prize.

This episode was a little slow for me. It focused on Kim’s struggle with the majority of her friends gone and learning how to work out while on vacation. The contestants were treated to surfboard lessons by Bethany Hamilton a survivor of a shark attack and an inspiration to all. I thought the surfboarding looked like a LOT of fun and how I would love to surf some waves in Hawaii. Note: I’ve never been on a surfboard in my life!

The final challenge was for the “big prize” immunity. The contestants raced down a hill to retrieve lei’s to decorate a team mates totem pole. If your totem pole found itself wearing 10 lei’s you were out of the challenge. Last man (or woman) standing wins!

This Week’s Excuse: I guess it was a good way to get the contestants off the ranch for a fun week away but honestly who uses that excuse?

Kim’s Struggles: It wasn’t until last week that I realized Kim was not so close to her other red team members. I’m sorry to say Kim has never been one of my favorites on the show but a little bit of emotion goes a long way. I think sometimes she would be a little better off not saying anything but overall I can see why she feels back into a corner.

Lei Challenge: I absolutely HATE it when they do challenges that are out of your control, especially when the prize is so big. I knew right off the bat there was probably no reason for Kim to even play. I just hate the idea that you can work your butt off and be taken out by a team member. With that said I think it was a stupid move for Kimmy to give the lei of death to Kim. She already had 7 why not use it to take out someone with no lei’s. Just didn’t see the strategy behind that. I also did not like the way the girls targeted Kim so plainly.

Mark my Man: Mark is one of the most thoughtful people this season. When it appears the whole house is against Kim he pulls her aside to talk with her about his dislike of events and promises not to right down her name. I think his points were valid and he seems like an honest man with integrity. If I had to pick someone I would want to win it would be him. However I just don’t think he has enough weight to lose to take home the whole thing.

Conda: Probably the most talked about player this season. I seems with some key players gone the house has become less of a drama pit. Conda seems more self assured and less problematic as the season has progressed. I was surprised to hear that everyone in the house loves Conda. I think that the editors showed the audience a different Conda then what the contestants are seeing.

Kimmy’s Exit: I wasn’t all surprised that between Kimmy and Megan the person leaving would be Kimmy. I’ve only seen one season where a mother has elected to stay and send her daughter home and that mother won the whole thing. Though I agreed with Kim’s statement that Megan is the bigger threat (a time when I think her thoughts might have been better off left to herself), I too would have voted for Kimmy out of respect for her as a parent.

Who Will Win?: I’m going to say the people that have the biggest chances are Jeremy, Conda, and Buddy. My dime is on Jeremy.

So with a handful left who is your favorite? And who do you think will win? These of course could be two totally different people.

« NextBook Premium 9 By eFun Review
My Readers, My Family are the Best! Thank You! »