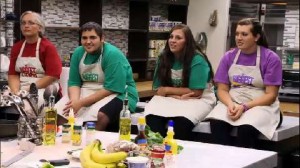 This episode of Biggest Loser was a fun one. This weeks excuse “Exercise is Boring”. I honestly have never found exercise boring it is just getting up and actually doing it that has been the problem. Dolvett took his team to a Zumba class. I’ve never been to an actual class but I love me some Zumba. I’ve only done it in the safety of my home behind closed curtains playing Zumba Rush Kinect. Just watching this portion of the show made me want to get up and join in. I thought Buddy was hilarious as he had no bones about shaking his body to the rhythmic exercise.

Bob took his team of three girls on a major bike ride up a mountain. I have to say between the two if we are talking about not making exercise boring Dolvett won this one hands down. I’m not knocking bike riding but it can’t compare to a Zumba class. Megan was pushed heavily this week in an attempt to get her out of her comfort zone and depending on herself for motivation (a little indication of the end I think?)

The contestants faced a super grocery cooking challenge that started in the grocery store. They had a 7 minutes to plan a dish and shop for it. Once the shopping was done they had 20 minutes to cook the dish and present it to a panel of past contestants to be judged. With the winner taking on some possible moula! Jeremy set the stage for his dish in the first 7 minutes with thoughts of creating french toast but forgetting the eggs ended up with some type of fruity dish on a piece of bread. Many of the dishes looked amazing. Chris was called out on her under cooked chicken that shook her confidence and almost sent her over the age. The winner who openly admits she can not and does not like to cook, Kim! Her prize was she gets $1,000 for every pound lost at the weigh in.

The fun over and challenge behind them the contestants dug in for the final workout. Once again Megan was front and center and Bob had a heart to heart with Chris. The end results of the workouts was our highest percentage lost going to Kim with 7 pounds and $7,000 in her pocket. I guess money is a major motivator. The next to exit Megan.

Thoughts on Kim: Kim hasn’t always been my favorite but I’ve softened to her some I love her drive and determination and it shows on the scale. I honestly do not feel she has a shot at the $250,000 because I don’t know she has enough to lose to beat the big boys.

Thoughts on Conda: I’m still not a Conda fan but I think the show is showing her in a different light. Either that or with all contestants that annoyed her out of the house it is more peaceful for her.

Megan Leaving: Though I would love to see Chris leave soon between Megan and Mark there was no question who I prefer to see leave.

I can not wait for tomorrow’s episode because it is my favorite sure to be full of fun surprises and tears (I always cry when loved ones see the contestants) because tomorrow is MAKE OVER WEEK!