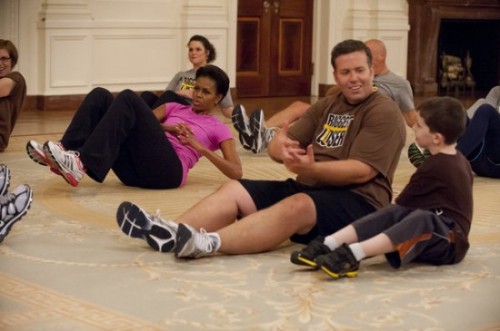 This week’s episode of Biggest Loser was continued from last week, at the white house. After the fabulous makeover the contestants got down with the first lady Michelle Obama literally. They got down on the white house floor for a little Biggest Loser workout, Bob and Dolvett style! After Mrs. Obama greeted each of the contestants personally they all got right down to Biggest Loser busy with a good hard workout. I loved how Mrs. Obama came across as personable and jumped right in and worked out with the best of them. She looked great too I might add! Michelle Obama also spoke of her Let’s Move initiative.

On a side note I have to say that Kim has raised some fine children. Every time you turn around when they are on screen they are praising their mother and how proud they are of her.  This is when you see the tough exterior of a strong woman break, but than kids will do that to a mom every time.  I have seen Kim transform through the show and she smiles more often than she did at the beginning.

During the trip in DC we witnessed a major break down from Chris. After a call to home her husband Roy, a former contestant, asked Chris to come home. I’m going to input my own thoughts here, ” I was shocked by the lack of support from home!” I can understand letting your spouse know you miss them and can’t wait for them to return but to ask them to leave when they are doing something for themselves that is so important is just beyond my comprehension. I know many of the spouses are feeling the same way but do not express it because they want to support their other half.

After the phone call Chris did what she has done in the past, she stuffed her face with fattening food. Definitely a first for me to see on Biggest Loser From a cheeseburger smothered in mayonnaise, a grilled cheese sandwich, to a banana with peanut butter and chocolate. Even my six year old daughter said if she would have just eaten the banana she would have been good. Having never been in the situation with cameras all around me I can’t say what I would do or not do but I would think I would refrain from eating simply because the cameras were there to get it all documented. My fear for Chris is that once she is home she will return to her old ways.

After the return home it was time for the weekly weigh in.  For the first time Kim feel below the yellow line with a 2 lb lost. Though she definitely was not throwing in the towel or ready to go home you could tell she had accomplished what she came to do.  She has the confidence to finish her journey and said that if she left it would be on a high note. Not surprisingly Chris also fell below the yellow line with a +2 lb gain, another Biggest Loser no-no.

When it came down to vote Chris was sent home. This move was probably not the best for Chris but the contestants have witnessed break downs and crying episodes and I believe they just didn’t feel comfortable sending Kim home over Chris. Buddy’s expression of Kim and her toughness and his feelings towards her opened up something in Kim she was missing. Realizing that the contestants do care about her was a gift.

Previews for next weeks Biggest Loser episode appear to shock viewers. Claims of production shut downs, and contestants walking out and mayhem ensuing. I honestly feel this is a marketing tactic to keep viewers interested. However I must admit it has peaked my interest.

So do you agree with Chris leaving? Who is your pick to win of the remaining 5? Do you really think the previews are going to prove true or is it all a marketing plow?

« Disneynature Chimpanzee Videos
5 Must Have Food Staples When Hiking »