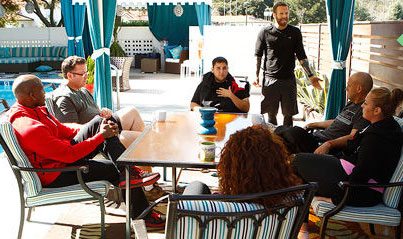 I heard the rumors like everyone else but I was still surprised by this weeks Biggest Loser Season 13 Shocker. The previews from last week hinted of mutiny and contestants leaving. But who Mark, Buddy, Conda, Kim, Jeremy or all of them? I thought it was all talk and a marketing ploy. At the end of the day it was half true. The remaining five contestants some how found out of the plans to bring back the voted off contestants and ONE of them would be competing in the finale. So even the first person voted off could find their way back to the Biggest Loser stage.

The episode begins with the production crew baffled by the missing contestants. The five remaining contestants decided they were all quitting. I think the thought was if they all left with no show to continue on they would half to change their plans. Each contestant sat down with the lawyers to discuss their options, what they had signed and agreed too and were left to decide their actions.

At the end of the day both Mark and Buddy left the Biggest Loser house. I was disheartened by this turn of events. I was half rooting for Mark half rooting for Kim in the final. While I do understand their views, morals, and principals as to why they were against the switch up. They also signed contracts at the beginning of the show. The Biggest Loser has housed them, fed them, trained them, and helped them gain confidence and power back that they were lacking. I just hate that so close to the end they have left be hind the opportunity to finish a journey and very possibly win some money that would benefit their families.

Buddy had a really good shot at winning with the weight he still needed to lose. Mark I think was close to goal and would have had a good chance up against Kim but not so sure if either of them have a good chance against who were remaining Conda, Buddy, and Jeremy. I was just so sad to see them both go.

The rest of the week went on with exciting prizes to come. The winner of the weigh in was taking home a 2013 Ford Escape. I had a Ford Escape and I loved it. The bad news is the winner with the lowest percentage fell below not a yellow line but a red line which means they were leaving no questions asked. However a final twist was relieved when Jeremy landed below the red line. Kim with a whopping 15 pound weight loss and 9.26% of her body weight eliminated took home the SUV and guaranteed her spot in the finale (bet she is glad she stayed).

The twist as was hinted too over the airways before the episode aired was all contestants return for one last challenge. The challenge appears to be a Tough Mudder challenge, which I found very interesting having just read about this challenge over at 2 Wired 2 Tired. They have not said how the contestant rejoins, I can only assume the winner of the challenge. Not remember so many of the first contestants right now I have my hopes on Emily returning, though I’m sure there are some strong men that could take this competition.

So what were your thoughts about the chaos of the Biggest Loser this week? Do you think Mark and Buddy made a wise choice? Would you do the same? If your spouse made that choice how would you feel?