With Ben Shuh home the black team was down by one.  Insert time for a challenge of sorts here. One thing about Biggest Loser they don’t often repeat temptations or challenges. Tuesday nights challenge was a “poker game” of sorts. The winner receiving…the second most coveted Biggest Loser prize “pounds”. Second of course only to immunity. The objective of the game…guess the percentage of weight your team will win in week two. Wage the most and win and you win a 5 pound advantage for your team at the weigh in. Wage the most and lose and you give a 5 pound advantage to the opposing team.

First off I would have never volunteered. In fact, I would have been the first one to step up and say, “Ok team who do we want to send in?” This way at least the chosen team members would have had a little less target on their back. Second, black team played it right the whole way. There was no need to put your team in danger of “giving” away the pounds. I would much rather be in the position of a 50/50 chance of getting the advantage or not, but at least I wouldn’t be giving it up. 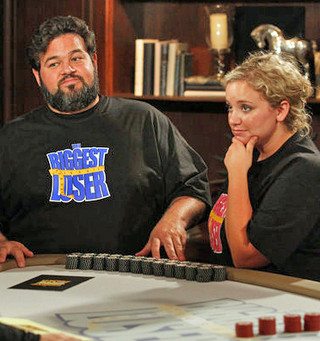 As for the red team, I do believe the wager of 3.8% in the second week was definitely high stakes. I can only assume the girls were not sure how much weight the percentage chosen would be per team member? 10 pounds a piece in week two? Not gonna happen! Especially when the contestants this season are  smaller. Needless to say it was a bad wager that definitely did not bold well for the Red Team.

A few things on my buddy Bob Harper. Totally love you but I think the camera’s got the best of you this week. I’m not sure if Dolvett’s win the previous week was in your head and nagging at you but there was definitely a man’s case of PMS going on. If Dolvett is copying your workout take it as a form of flattery. He must think he works if he is asking his team to do a “Bob” workout.

Despite the black teams win I have to say it was by default. Without the 5 extra pounds the red team once again pulled the winning numbers. The Biggest Loser is a game non the less and because the extra 5 pounds was in play I was happy to see the black team squeak out the numbers to win this week’s weigh in and keeping everyone on the ranch.

Mike Messina Leaving:  Honestly he would not have been my first choice, but then I only see what we are shown on TV.  My vote would have been for Kim Nielsen, not for any reason other then the lowest percentage of weight loss. No one stood out as a “need to go” home person this week. I do think that Conda Britt was too rough on Mike and maybe should have had a talk with him before she decided to vote him off based on what she “thought” at the time was a good reason. 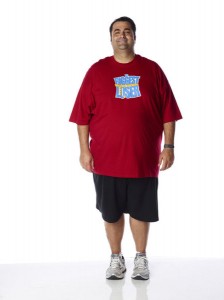 Here’s to next week’s episode of Biggest Loser