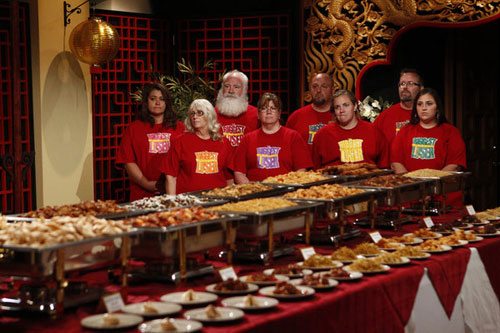 The episode with temptation of many sorts at its center. Before we get into the yummy temptation above lets talk about another temptation that the Biggest Loser contestants face…”Missing Family”. This I’m sure must be the hardest part of living on the ranch. Harder then the exercise, the eating healthy, and Bob constantly yelling “more” in your ear. Missing his family was too much for one contestant this week. After his brother leaving the week before Joe Messina chose to leave the Biggest Loser ranch after just a couple weeks. This was a twist I did not see, however when I saw the headlines that a contestant left (before seeing the show) my guess would have been Joe. I can’t explain my reasoning but Joe was my guess.

Thoughts on Joe Leaving: I will be the first to admit that I have never been in a situation of being away from my kids weeks at a time, so I can sympathize with any parent that is in the situation. That said I still can not understand how someone would go through the application process, know what they are signing up for, and chose to leave when so many other people fought for that spot and lost. Again I have never been in the situation so I don’t know how I would react but as a fan I am never happy when a contestant chooses to leave on their own. If you missed the episode Joe Messina left the Biggest Loser ranch because he had an overwhelming feeling that he needed/wanted to be with his family.

Temptation: The temptation and you can see was a room full of Chinese food, have I mentioned I LOVE Chinese food! The team to eat the most calories would get to chose contestants to face off against each other in the weigh in. Black vs Red, one point for each member who win their face off. The team with the most points wins the weigh in. In a temptation situation my advice is DO NOT EAT, have you seen the show before? Do you know what you have to deal with when you tell your trainer you ate? Red team knew the drill and chose not to eat. Black team squeak by with a measly 60 calories. On second thought how could the trainers get mad with 60 calories? I guess this was the case because we didn’t get to see the Black Team (winners by eating two fortune cookies) tell Bob of their win. I guess he wasn’t mad enough to show us!

Favorites: This episode has finally found some favorites for me. It usually takes a little time. I’m not extremely tied to anyone as the stand out “I want them to win” but I few of them I’m rooting for on the inside. Two of the people I love are Roy  and Chris (Christine) Pickler. What I love about these two is the bond and relationship that is so evident on the screen. They genuinely care for each other and it shows. Roy seems to be just what his looks portray him to be a big old “Santa Clause”. I was impressed that of all the contestants on the red team a 63 year old man had the biggest percentage of weight loss this week. I was touched when he gave his video chat to his wife. My other favorite is Cassandra Sturos, her optimism and spirit is invigorating and catchy. She just seems so up beat and I see her confidence growing in spite of a particular obstacle this week.

Non-Favorites: Sometimes there are people that just rub you the wrong way. I’m sorry to save for me one of those people is Conda Britt I don’t want to be mean or spiteful I don’t personally know the girl. However the way she is portrayed on the first couple episodes is not flattering. My thoughts are she is masking some confidence issues with sarcasm and an outside perception that she is more then confident. I will keep this in mind as I watch the show. I have seen some emotional break downs at times. If Dolvett (or Bob) can pierce through the armor and get her to open up maybe, just maybe we will see another side of her.

I’m happy to see the Black Team win once again, you know I’m a Bob Harper fan all the way so GO BLACK! I look forward to another interesting episode next week.