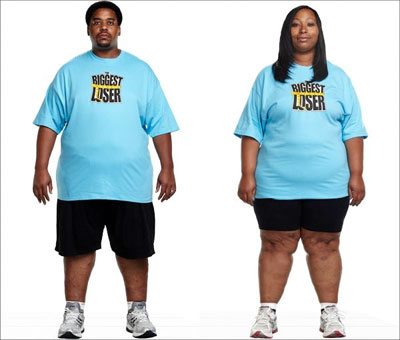 These weeks Biggest Loser was about two colors…Aqua…and Red. Not really sure what I mean by both colors. Aqua was the team color that came back to fight for a chance to get back on the ranch. Red was the color of my face during most of the episode. I have been pretty gentle with my thoughts and giving everyone the benefit of the doubt but this week I was just so upset. I will of course preface that with the fact that we only see what the camera lets us see so there very well could be things going on behind the scenes that we are unaware of.

Aqua Teams Return: The Aqua team had a chance to get back on the ranch if during the 30 days at home they lost a total of 50 pounds. You know I was not really happy with the whole “we are sending you home” thing in the first place however my heart was routing for the team. Considering they lost a total of 60 pounds on their own without even setting foot on the ranch shows how motivation an be a key factor in weight loss. I’m sure they had some training and tips and weren’t sent home blind, but it takes a lot of determination to do it without ever setting foot on the ranch.

I was extremely proud of them and thought they deserved to be re-united with their “almost” team mates.

Reaction of Aqua Teams Return: The eye rolling, chest crossing, negative attitude from quite a few members of the ranch had my face as red as Dolvetts’ team shirts! I can not believe that people can be so cold and careless with another human beings emotions just because the team did not have the luxury (for lack of a better word) of bonding with other team members. I knew as with any group of people coming back and being part of a team was going to be hard. However I was not impressed at all with the reception they received.

As much as I have given Conda the benefit of the doubt if I could have smacked them eyeballs out of her head I would have done it in a heart beat. I thought Kim’s attitude was just as bad this week. Now there were times when maybe Adrian’s comments seemed a little off, but I honestly think the guy was trying to fit in. I think he was pumped, excited, and proud of the fact that he had earned his way back. Only to be confronted with nothing but attitude and dislike of his return. I feel like his accomplishment was overlooked and the team felt threatened.

God Bless Mark (almost) and Nancy: I think the two of them tried their best to mend the bridge and keep things together. I think they had a positive outlook on Adrian and Daphne’s return and were appalled with the attitudes of their team mates. However Mark did fall out of my graces a little at the end.

Adrian and Daphne’s Surprising Week One Weight Loss: So here is my honest thoughts on the lower then low numbers. Originally I told my husband these two are going to lose big. The shock to their system and the new routine will shake things up. However the minute Daphne registered only one pound of weight loss and remarked on her eating habits I believe I know what happened. First I have to say I’m no expert and I have no authority. However from my own experience of eating a very, very low carb diet I believe the weight loss truly was the difference in diet. I have been on an extremely low carb diet in the past. The MINUTE and I mean MINUTE I would go off if even for one meal I would gain 5 lbs instantly. The minute I put carbs back into my body, good or bad I would gain weight. It would level off quickly but I always gained back 5 pounds instantly. I believe that Adrian and Daphne were eating a very low carb diet to lose their weight and added back in the oatmeal and other healthy carbs still caused this gain effect. The fact that they still both lost was great! I also believe they will both have a higher weight loss next week. Despite Mark’s comment I do not believe they were playing “the game”.

Black Team’s Win: As usual I’m excited to see the black team win. I was extremely surprised by the low numbers all around and shocked they were able to pull it off. GO BLACK!

Nancy’s Exit: I was not all to excited by the choice of vote off. Strategically Nancy was probably the right choice she just can’t lose weight as fast as the rest of them. Not for lack of trying I just think she has a lot less to lose and her age plays a factor in the speed of the lost. I honestly would have liked to see Conda go. Though I believe she needs so emotional help and a big breakthrough. Her attitude grates on my nerves and I just can’t seem to give her the benefit of the doubt any longer. I must admit though Kim is close behind.

So what were your thoughts? Are you enjoying this season? Do you agree with Nancy’s exit? Do you think Adrian and Daphne were treating fairly?