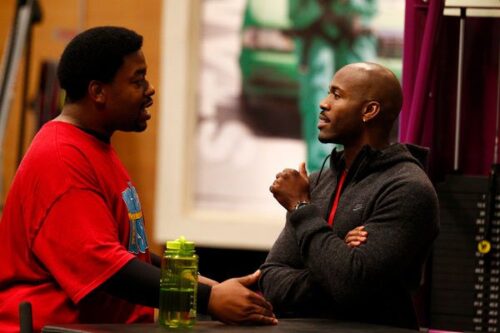 UGH almost forgot about this weeks episode though I’m not sure how that was possible. Honestly I don’t know what to say about this episode I feel like I’m in the middle of a soap opera.

Adrian’s Unwelcome: I still believe that Adrian’s re-entrance onto the ranch was not a fair position to put him in. I honestly believe that the majority of his comments, out of line or not, were his way of trying to show his team that he is there to help, to get fit, to be part of the team. I just don’t think he has a good way of conveying those feelings.

Red Teams Reaction: After this week’s episode though I still side with Adrian some I do believe there is a lot more going on then we are seeing. For each member of the team and even Dolvett to have what appears to be many of the same feelings I think there is something to it. I did notice this week that even Adrian irritated me with his inability to listen. I’m not saying he has to take the advice of everyone there he is his own person but I think he would have been better off just not voicing as much as he did.

Adrian’s Exit: It was obvious that it was coming I wasn’t surprised at all. Just a shame it has to be so dramatic. It also didn’t appear he has lost much weight since he left however it seems like he has found some peace in his life and with a new baby on the way I hope he can only continue to succeed.

Daphine and Bob: I love how Bob stood up for Daphine and showed the team that she is not the weakest link and deserves the right to show them she is doing all that she can. What I was not thrilled with is the previews for next week. Depending on how Daphine handles her brother leaving she very well could seal her own fate with her team.

Conda: I have to add in here I think it was ironic her saying at the voting off that they didn’t need “drama” in the house when she is the worst drama starter on the show. I think Dolvett was right on about all her complaining. If you want to complain about yourself that is one thing but really what does it matter what anyone else is doing I think this is one of her biggest issues she is so concerned with everyone else instead of herself.

I really hope this show can turn around a little it is getting almost annoying to watch!

« A Little Upset With Applebees Friday Night
Cake or Not: Collection of Amazing Cakes »