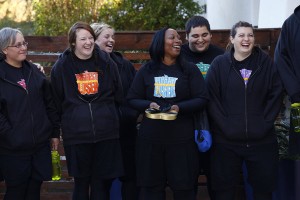 This week is the week of Love for most and maybe a little of that rubbed off at the Biggest Loser Ranch (just a little). This week the contestants were once again faced with a week of no trainer. At least the majority of them. This week the trainers had to pick one of their team members to send home. Don’t worry they weren’t sent home in the sense of “going home for good”. Each trainer left with a contestant to train at home with them while the rest were left to train themselves at the ranch. The twist was the person sent home was the only person who’s weight was going to count at weigh in. The weight of the team literally rest on the shoulders of one individual.

Dolvett’s Choice: Dolvett chose Conda. I believe this choice was due to his need to try to find out why Conda acts the way she does so he could really help her more on the emotional side. We found out a little bit more of why Conda has up those defenses I have talked about in the past. I did notice last night that not only is Conda the one that complains the most she is also the one that cries the most. I think Conda has a lot of issues to work through and if she can really break through that wall she will be a much happier person. Tuesday night we saw that crack in the wall widen.

Bob’s Choice: Bob chose Daphne to return home. His motive was revenge, he felt that Daphne had the most to prove and the biggest motivation to do it. The vote off of her brother did not sit well with her. I honestly thought choosing Daphne was a little unfair to the rest of the team due to the fact that she just returned to the ranch and had the benefits of family not too long ago.

Sears Tower: I thought that was the most awesome, hardest, amazing, and rewarding workout I’ve seen. To get to the top of that tower and say you walked the whole way is a feat you can brag about the rest of your life. Honestly though didn’t Bob look like he wasn’t breaking a sweat at all! Congrats to Daphne on her accomplishment.

Chris’ Rant: I thought it was over the top and uncalled for. Chris who was a favorite of mine in the beginning has been removed from that list. I agree with Jeremy that no one should take offense for not being chosen by Bob to go home. No one deserved it over another.

Conda’s Advantage: With two pounds you would think you have it in the bag. No chance you couldn’t win. All I can say about this is refer to my point above. Daphne knocked the ball out of the park and then some.

Roy’s Exit: I do not feel he was the best choice for the team. I think for 62 years of age he is doing amazingly well and after a 9 pound weight loss I don’t see how he is not “in” the game. Everyone is entitled to a breakdown once in a while. I honestly feel Kimmie would have been the best choice based on weight to lose. On the flip side you would want her next to you during the finale because of the fact she doesn’t have as much to lose.

Next Week: Either they did a great job of editing it to make it look very interesting or next week should be very interesting. It appears to be some major game playing going on, based on the previews of course.

So did you watch? What are your thoughts on this weeks episode. Do you have a favorite or winning prediction?