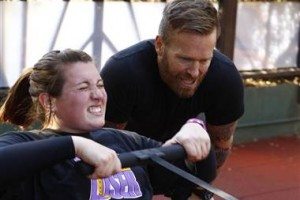 If you have been following my recaps you know I’ve missed a week. I’m actually planning on going back and recapping the week but didn’t want to get too far behind. We didn’t watch episode 8 until Monday and then finally episode 9 last night. The boys sports schedules are playing havoc with our usual TV time slots.

So this weeks episode I have to say was tame compared to episodes past. It was actually a favorite of mine so far. The contestants were met with a surprise after the weeks way in. They were headed home not just for a week but for 18 days. During their stay at home they had one major goal in mind. That goal was to lose 15% of their body weight. This loss would guarantee them immunity at the weigh in upon returning to the ranch. In addition to this goal the contestants competed in a challenge immediately upon arriving home with the prize being $10,000 dollars! The challenge was who could row 10,000 meters on a rowing machine the fastest. The episode revolved around the struggles that each contestant faces being home instead of on the ranch.

Rowing Challenge I think a challenge like that is so hard when you don’t have your competition next to you where you can see them to help motivate you. I was surprised Emily came in fourth and I predicted the winner to be Mark. I was glad to see Chism win.

Kim’s Home Struggles: As a mother of three children I can so relate to her struggles going home. Part of it I believe has to do with her being a “single” mom. I know if I was in the situation and came home my husband would be there to push me to continue as he helped with the children. Kim did not have that luxury. Also as a mother I know it is tough after being away for 2 months to come home for 18 days and not soak up all the time you have with your children.

Emily’s Self Doubt: I really hope talking to her Dad opened up the gates for her to stop doubting herself and trying to earn her fathers love and respect. It sounds like as a child because he coached and pushed her she equated that as the only way to gain her fathers love. He didn’t appear to be that way and I hope she can move on and do what is right for her.

Megan’s Leap Just wanted to say was happy for Megan she made it on to the horse. I think the milestone will only make her stronger.

Shocking Weigh In: I was heart broken like the contestants to see Chism just one pound short of being safe. I think while home he probably concentrated more on his friends then endless hours in the gym. He worked out and ate probably like anyone would do that wasn’t competing. Eleven pounds is still a good weight loss it is in the right direction. I was not at all surprised at Mark’s reaction and wonder if Biggest Loser would have compromised? I don’t think so as I believe they would lose the integrity of the show. I was very proud of Chism and the speech he gave before he left. I really hope to see him thinner at the finale. Kinda wondering why we didn’t see a “how he looks now” clip, hope that doesn’t mean he has gained.

So overall this weeks episode was less drama and stress free. I would love to hear what you think about Mark leaving instead of Chism? Do you think Biggest Loser should have considered it?