Home » Lifestyle » Everything Else » Born to be Wild 3D : Win a Private Screening
As an Amazon Associate I earn from qualifying purchases. 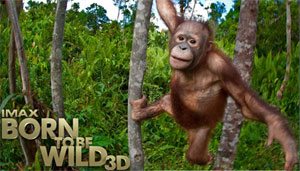 Right now if you sign up for a WB Insiders Rewards Membership (which is FREE) you can enter to win a private screening of the soon to be released Born to be Wild 3D.

11 winners in total will win a chance to see Born to be Wild 3D.  One Grand Prize winner receives a private screening for themselves and 50 of their friends. In addition they will receive a poster signed by Morgan Freeman and a Born to be Wild  3D t-shirt.

10 First Prize winners will receive a Born to be Wild 3D poster, t-shirt and two tickets to an IMAX ticket theater. 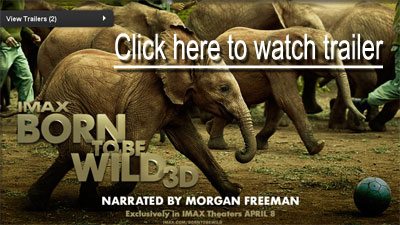 Born to be Wild 3D

Born to be Wild 3D is an inspired story of love, dedication and the remarkable bond between humans and animals. This film documents orphaned orangutans and elephants and the extraordinary people who rescue and raise them—saving endangered species one life at a time. Stunningly captured in IMAX 3D, Born to be Wild 3D is a heartwarming adventure transporting moviegoers into the lush rainforests of Borneo with world-renowned primatologist Dr. Birute Galdikas, and across the rugged Kenyan savannah with celebrated elephant authority Dame Daphne Sheldrick, as they and their team rescue, rehabilitate and return these incredible animals back to the wild. Narrated by Academy-Award® winner Morgan Freeman, Born to be Wild 3D is directed by David Lickley and written and produced by Drew Fellman. This Warner Bros. film is produced by IMAX Filmed Entertainment and distributed by IMAX Corporation and Warner Bros. Pictures and will open April 8, 2011 exclusively in IMAX theatres.

Disclaimer: I was compensated for my time to write this post. Opinions are my own and NOT influenced by the monetary compensation. You may read more of my disclosure here.

« HOP to Burger King
ADHD and the Stigma Placed on Parents »