Home » Blog » Call Me Mrs. Fix It!
As an Amazon Associate I earn from qualifying purchases.

A couple months ago the kids and I encountered an experience that would have been better handled by their father. My son called me up and told me there was a spark in the oven. Not knowing what he meant but hearing the anxiety in his voice I asked him some questions. Of course when you think of spark, you think fire, and then naturally water. So I told him to throw some water on the spark. It did absolutely nothing. I then told him to go get the neighbor, thankfully we are friendly with them and they rushed over. By the time he got their the spark was gone but I was left with a broken baking element. 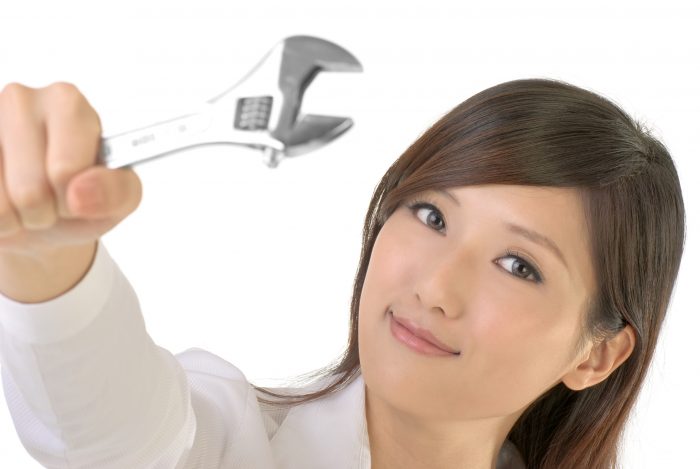 He told me when I came home and went over to talk to him that the water on the hot element caused it to crackle and break. Great! Now we have no oven. I wasn’t upset at all really, just glad it was something little and all was ok. This of course is not something my landlord would be obligated to fix after all it was my own fault. I told my husband I was going to order the element and replace it myself. He looked at me like he does often with that “you are going to do what?” look. He is use to it by now but reminded me I was not an electrician.

I order the part using the serial number and calling GE to make sure I ordered the correct replacement part. Tip: calling the manufacturer is a great way to ensure you order the right part but I don’t suggest you order it from them. The price was $60 for the same part I ordered on Amazon for $21.

The following weekend I pulled the oven out and unplugged it. Using a little Google magic I found a website that had photos and a video on how to change a baking element. It turned out it was just as easy as I thought. You simply disconnect the old one and plug in the new one. I did have to remove the back of the oven because the piece that the baking element plugged into was rather tight and retracted into the oven when I pulled out the old one.

At the end of the day the oven works properly and only cost me $21 + shipping and in return I have a since of accomplishment! I’ve actually considered getting myself one of these handy devices so that I can hopefully look into my electronics and fix them if they break or act weird. What do you guys think? Would you say that a multimeter is a must have?

I’ve always been this type of person, trying to fix something first before I am willing to pay to have someone do it for me. A couple years ago I fixed our washer when it stopped working in the middle of a load of laundry. I’ve worked on our refrigerator and garbage disposal with positive results as well. How about you? Do you fix it or call in a Mr. Fix it?

« What’s the Time? It’s Play Time!
How to Find High Quality Glasses at a Low Price »