Home » Lifestyle » Entertainment » Movies » Can’t Wait to See Left Behind in Theaters October 3rd
As an Amazon Associate I earn from qualifying purchases. 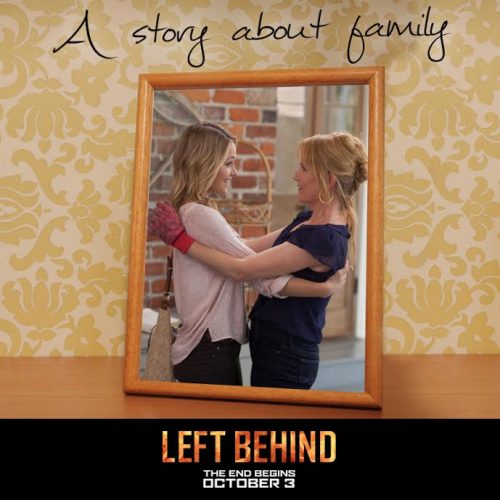 LEFT BEHIND follows Rayford Steele (Nicolas Cage) who is piloting a commercial airliner just hours after the Rapture when millions of people around the globe simply vanish. Thirty thousand feet over the Atlantic, Rayford is faced with a damaged plane, terrified passengers, and a desperate desire to get back to his family. On the ground, his daughter, Chloe Steele (Cassi Thomson) is among those left behind, forced to navigate a world of madness as she searches for her lost mother and brother. Shot mostly in and around Baton Rouge, LA., LEFT BEHIND was produced by Paul Lalonde and Michael Walker and co-written by Paul Lalonde and John Patus.

I really enjoy many of the movies that Nicolas Cage stars in and I love the sounds of this movie. The plot sounds unique and mysterious and full of action and adventure.

“My greatest hope for this movie is that people will be entertained and thrilled by it, but also that they’ll go home and have conversations with their family, and ask ‘do you think this could happen, or couldn’t happen?’ and it’ll inspire discussion and closeness,” says leading actor Nicolas Cage.

The movie is based on the New York Times bestselling book series of the same name, co-authored by Jerry B. Jenkins and Tim LaHaye. Based on the Bible and published in 32 different languages, the series has sold more than 65 million copies and is one of the best-selling fiction series of all time. I had no idea it was based on a book(s). Usually when I find something like this out I have to read the book(s) first!

Wow after watching the trailer I’m definitely intrigued and since I’m currently not reading anything on my Kindle I think I’m going to get this and begin reading it now! Left Behind will hit the theaters on October 3rd!

Have you read the books? Do you plan on seeing the movie?