I have to admit I have never seen the FIFA World Cup fever in the US like it is this year. Everywhere I turn everyone is talking about the FIFA World Cup. Even my oldest son has been watching it on TV and evening taping some of the games he can’t watch. Not much of a sports guy I was pleasantly surprised to see him interested in watching a sport on TV. He told me just yesterday that he has really been enjoying watching it.

Coca-Cola has partnered with 2014 FIFA World Cup and come up with the “THE WORLD IS OURS” REMIX, COCA-COLA’S SONG FOR THE 2014 FIFA WORLD CUP. I just took a quick second to listen to the song on the below video and I thought it was AMAZING. The rhythm is not over powering yet gets you to move, the lyrics are mesmerizing and the voices of the singers are just beautiful. You have to take a quick listen yourself.

The World is Ours

“The World Is Ours,” written by world-class songwriting team Rock Mafia, aims to capture and share the energy, passion and rhythms of Brazil with millions of soccer fans around the world. The song was produced by Brazilian-born Mario Caldato Jr., features Brazilian percussion band Monobloco and brings a variety of Brazilian musical flavors – including samba, baile funk and technobrega – to the world

To celebrate the FIFA World Cup, Coca-Cola introduced special limited-edition FIFA World Cup™-branded bottles, fridge packs and collectible can designs. Designed by Brazilian artist Speto, the commemorative packaging embodies the spirit of Brazilian street art and features the colors of the country’s flag. Celebrating soccer, happiness and the power of the world’s most popular sport to bring people together, these package designs will be on store shelves nationwide in May and June as they make way for Share a Coke packaging. 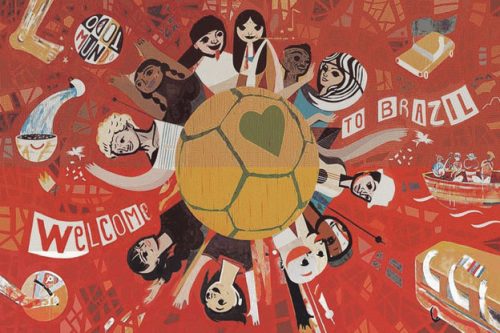 “The Happiness Flag” – the largest-ever, digitally produced Photomosaic® Flag. Over 200,000 fan images were used for “The Happiness Flag” to recreate a unique design developed by Brazilian street artist Speto in collaboration with Argentinian artist Tec. The flag was digitally-produced by Robert Silvers, the inventor of Photomosaic technology 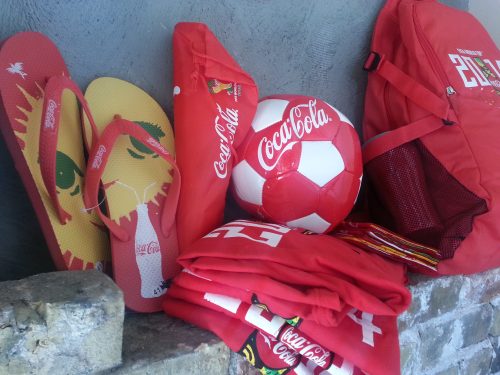 Thanks to my friends at Coca-Cola for this post.