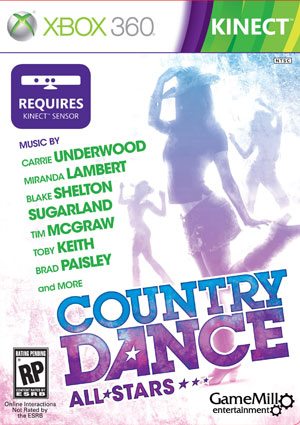 From the Main Menu you have a few options:

We decided to just jump in and went with Play Now! After all it was country dancing should be as simple as following the avatars right? That would be the case if you decided to look at the difficulty of the songs before you began to play. Tip to newbies: Make sure you are on level One, as in easy. I didn’t pay attention to the difficulty and instead just picked a song I liked “Cowboy Casanova”, which happened to be a level three. Let’s just say it was not a stellar performance. The dancing on screen look pretty cool the dancing off screen not so much.

After my less than perfect song selection I picked a much easier song. They didn’t have level 1/2 so I chose a level One. This time the dancing was much easier to follow. My first attempt I ended with 50% good, a small % perfect, and some ok and missed percentages. I felt I did better than I was scored but the Kinect is not perfect. I had a good time earning my score.

I love moving and getting in a little exercise in a fun way. I could definitely see my daughter and I playing in the future. I like that there are different levels for the beginners or worse then beginners like myself and higher levels for the more advanced. I can see me doing the same song over and over again to keep my percentages in the Great/Good section.

There are several Game Types to chose from:

Overall the point of the game is very simple, dance and dance good. If you do you will be rewarding with Greats and Goods! It is fun for the whole family. My only complaint regarding the Country Dance All Star Kinect game is the mode of picking songs and changing screens. I absolutely can not stand the sliding method. Often right before I slide my arm moves slighting and I end up picking something different. I much prefer the hold and hover method. Here is a quick glimpse of the game.

« What Do You Recommend For Struggling Readers?
Thanks Honey For Having My Back! »