Home » Lifestyle » Entertainment » Television » Cross Dimensions With ‘Phineas and Ferb: Across the 2nd Dimension’
As an Amazon Associate I earn from qualifying purchases. 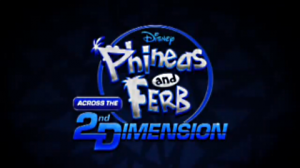 I may be in San Diego at BlogHer on August 5th but I know what my kids will be doing. They have been looking forward to the forthcoming release of Phineas and Ferb Across the 2nd Dimension.  This Disney Channel original movie will premiere Friday, August 5th at 8:00 p.m., ET/PT on the Disney Channel.

In this animated adventure based on Disney Channel’s Emmy Award-winning comedy series “Phineas and Ferb,” stepbrothers Phineas and Ferb go on their biggest journey yet, into another dimension! When the boys finally discover that their beloved pet platypus Perry is in fact a secret agent who battles the forces of evil daily, they join him on a grand adventure that blasts them to another dimension where a truly evil Dr. Doofenshmirtz has taken over an alternate Tri-state Area. When they uncover his ploy to travel back to their dimension to take over their Tri-state Area, the gang, as well as their alter-egos, must band together to stop him.

My boys are both fans of Phineas and Ferb and it is one of the cartoons that I don’t mind them watching. I love that the two boys are always into mischievous trouble and the big sister is constantly trying to get the parents to notice. Reminds me sometimes of the dynamics in my home (with a little sister of course) or of Ferris Bueller’s Day Off.

To help celebrate the upcoming movie and get us into the spirit Disney Channel provided us with this awesome pack of Phineas and Ferb goodies. The kids really enjoyed the CD and the t-shirts, and we divided up the rest among the three of them. 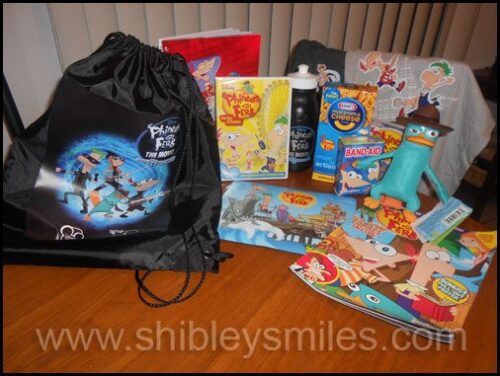 In addition to the movie the soundtrack, “Phineas and Ferb: Across the 1st and 2nd Dimensions,” from Walt Disney Records, will debut Tuesday, August 2, and a two-disc “Ultimate Fan Pack” including a DVD, digital copy of the movie, eight digital music tracks, eight deleted scenes, a bonus episode with character and filmmaker commentary and more, will be available Tuesday, August 23.

If you miss the show on August 5th on Disney Channel  you can see it again on Saturday, August 13th, at 10 am , ET/PT on Disney XD. It is also expected to be aired on ABC at a date to be determined. If that still isn’t enough Phineas and Ferb for you, you won’t want to miss…

“Phineas and Ferb” Hatch a “Play-Bus”

The popular chattering character, Perry the Platypus, of Disney Channel’s Emmy Award-winning “Phineas and Ferb,” meets the distinctive, 27-foot rounded aluminum body of a customized Airstream trailer when Disney launches the “Perry the Platy-bus On Tour,” originating MONDAY, JULY 11 in New York City. Outfitted stem-to-stern as Phineas’ and Ferb’s teal-colored pet platypus, Perry the Platy-bus will explore the adventures of the road on a coast-to-coast journey to San Diego’s Comic-Con International (July 21-24) and then slips through the wind, all the way to the Disney D23 Expo in Anaheim (August 19-21)

Here is a little trailer for you to get yourself ready for the upcoming event. Enjoy!