Home » Blog » Does Your Child Have Sleeping Issues?
As an Amazon Associate I earn from qualifying purchases. 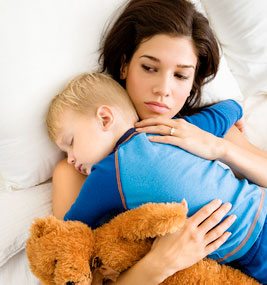 When my daughter started waking up in the middle of the night moaning and whining I assumed she was having a bad dream. Half asleep myself I would try to comfort her and tell her she was ok. Eventually she would fall back a sleep. After a couple more times I noticed that she would sometimes go to the bathroom. So I thought maybe this was her body’s way of trying to wake her up.

It wasn’t until this weekend that I realizes she was having “Night Terrors”. I wouldn’t have even known what they were if I friend of mine hadn’t been talking about her daughter going through the same thing. Last Saturday my daughter woke up moaning, whining, and she sat straight up in bed with her eyes wide open but a look of panic. She was sweating quite a lot. I tried to comfort her and she would just get antsy and wouldn’t stay on my lap. She was making no sense. This went on for a good 5 minutes. I finally picked her up and was going to walk her to the living room and try to rock her when she got down to go to the bathroom. I guess that woke her up enough because when she was done she ran back into bed and went right back to sleep.

Night terrors may be caused by the following:

In addition to frequent recurrent episodes of intense crying and fear during sleep, with difficulty arousing the child, children with night terrors may also experience the following:

I believe this is exactly what my daughter was experiencing and I believe it was due to her sleep schedule and trying to get back on track for school. I also read that it is often hereditary. Which more then likely means she got it from me as I myself have suffered form sleep paralysis.

Do you are your children suffer from any sleeping disorders? Any advice?

« The Race is On : The Cupcake Race That is
South Florida Greeting In the Form of a Hurricane or Two »