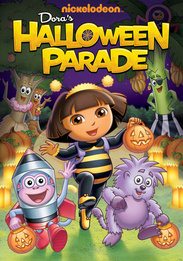 NEW YORK – June 22, 2011 – Preschoolers will join Dora and her friends on exciting  Halloween adventures in the new four-episode DVD, Dora the Explorer: Dora’s Halloween Parade. Created by Nickelodeon Home  Entertainment and distributed by Paramount Home Entertainment, Dora the Explorer: Dora’s Halloween Parade will be released on DVD on August 30, 2011, for the suggested retail price of $16.99.

Boo!
It’s Halloween, and while trick-or-treating Dora and Boots are surprised by a cute little monster who they help home before the arrow on the big clock strikes 12.

The Backpack Parade
Everyone is dressing up their backpacks in different costumes for the Backpack Parade. Backpack is really excited because this year she gets to lead the parade but she’s having trouble with her allergies.

Dora, la Músico
Dora and Boots are leading a musical parade to free the instruments that were locked up by the evil Señor Shhh.

Dora the Explorer, created by Chris Gifford, Valerie Walsh Valdes and Eric Weiner, is a play-along, animated adventure series starring Dora is a seven-year-old Latina heroine whose adventures take place in an imaginative, tropical world filled with jungles, beaches and rainforests.  She explores her world just as preschoolers do every day, and the show is designed to actively engage its audience in an interactive quest using a variety of learning techniques.

In every episode, Dora and Boots invite the audience to participate in an exciting adventure, where each step of their journey consists of a problem or puzzle that Dora and the audience must think their way through in order to solve the next problem.  Dora is proudly bilingual and uses her knowledge of English and Spanish to communicate with her friends, overcome obstacles and reach her goals.  In each episode, Dora teaches Spanish words or phrases to the viewers and then asks them to use it to solve a problem and forge ahead.

« My Passion Many Moons Ago : Wordless Wednesday
Spy Kids: All the Time in the World Nintendo DS Game »