Home » Lifestyle » Everything Else » She is Unique and She is My Angel
As an Amazon Associate I earn from qualifying purchases.

My daughter was trying to decide what to be for Halloween this year and decided she wanted to be a beauty pageant winner. So I told her we could look through costumes to find a dress she liked and then we could buy a tiara and sash to complete the costume. I was kinda surprised this was her choice but who am I to argue. You see my daughter isn’t a girly girl. She has never been fond of the color pink, flowers, and princesses. She may love to paint her nails and do her hair but otherwise you can find her running outside with the boys and drawing or singing.

When we sat down and started looking through costumes on the internet I could see that finding a dress for a beauty pageant winner soon became a thing of the past. I noticed she was leaning towards the punk rockers, scary witches, and pretty much all costumes in black. When she finally picked out her costume we took a trip to Spirit of Halloween and as luck would have it there was only one left that just happened to be in her size. Is that a coincidence? I think not! 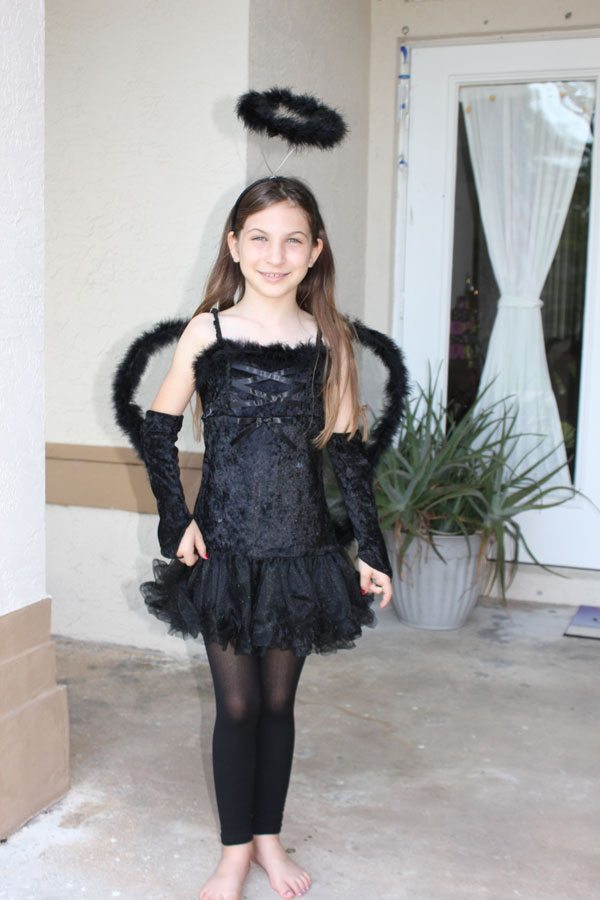 While some mothers might cringe that their daughter would prefer to be a fallen angel instead of an angelic white one I do not. I love her uniqueness and her funky side. I love that she is her own person and doesn’t want to conform to what others feel she should be. Don’t get me wrong she comes home and decides she wants to wear bows in her hair because her best friend does and they want to be a like. She is not a athletic shoe type of girl and owns 4 different pairs of black boots. She has asked to get highlights in her hair (which I have declined due to her age) because she thinks it would look cool.

So even though she has a funky punk rocker, skulls, and black (being her favorite color) side, she is an A+++ student and is always bringing home extra homework because she wants to learn more. She loves to help me cook and clean (though she hates cleaning her bedroom). If her wanting to wear a fallen angel costume instead of a white one and her refusing to wear socks with her shoes is how she asserts her uniqueness than I think it makes her special! Plus I think she looks adorable as a Fallen Angel!

Note: It must be popular because I saw that both the kids and teen fallen angel costume is out of stock.