Home » Lifestyle » Entertainment » Fanboy and Chum Chum DVD : Relase Date May 24, 2011
As an Amazon Associate I earn from qualifying purchases.

Fan Boy and Chum Chum in their DVD premiere was released May 24, 2011 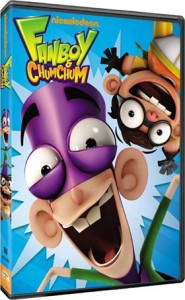 Fanboy and his trusty sidekick, Chum Chum, are bringing their hyper imagination to stores with their first DVD, Fanboy and Chum Chum. Featuring an all-star cast of voices including Josh Duhamel and Jamie Kennedy, this DVD comes packed with eight adventures from the first season of Nickelodeon’s hit CG-animated comedy series, including two Emmy®Award-winning episodes. In addition, fans will find exciting extras including six Fanboy and Chum Chum shorts and the pilot episode of Nickelodeon’s Planet Sheen.

Who are Fanboy and Chum Chum:

Created by Eric Robles, Fanboy and Chum Chum is the hilarious story of a boy named Fanboy and his best friend and trusty sidekick, Chum Chum, two endlessly energetic “super fans” of all things sci-fi and fantasy. Their world is full of comic adventure (and misadventures) as they share a hyper imagination that enables a wide-eyed acceptance of the bizarre. They’re fearless! They’re adventurous! They wear underwear on the outside of their costumes! They’re Fanboy and Chum Chum.

The boys and Honey watched this together, ages 13-5. Honey found it funny but I think she watched it more so to spend time with her brothers.  The boys watch episodes of Fanboy and Chum Chum and were disappointed that they had already seen all of the episodes.  However both boys still found the DVD entertaining and I enjoyed the fits of laughter that would erupt from the room now and again. I personally find them as silly and goofy as the three stooges which is probably why they are appealing to my boys.

There is a new kid at school, Kyle, who is claiming to be a wizard and Fanboy and Chum Chum are determined to “play” wizards with him – whether he likes it or not.

Fanboy and Chum Chum have a new best friend made of gum. Since gum is not allowed in school, evil Janitor Poopatine is out to destroy their friend.

Fanboy and Chum Chum can’t wait to spend their only dollar on two delicious Frosty Freezy Freezes. When Chum Chum loses the dollar after they’ve already finished the drinks, they have no way to pay.

In a moment of weakness, Fanboy agrees to trade Chum Chum for one of Yo’s awesome toys. Soon after, Fanboy misses Chum Chum and wants to swap back. Unfortunately, Yo won’t give Chum Chum back without a fight.

Fanboy and Chum Chum are waiting in line at the movies when Boog arrives to ruin everything. In a wonderful twist of fate, they get the last tickets and Boog has to obey their every command to get into the movie.

Fanboy in the Plastic Bubble

Fanboy and Chum Chum buy Boog’s childhood plastic bubble and have the time of their lives. When Boog realizes the bubble makes them bop-proof, he regrets selling it.

Fanboy, Chum Chum and Kyle embark on a camping trip in the great outdoors, also known as the roof of the Frosty Mart. Their camping trip takes a turn for the worst when the boys get marooned on the roof. A harrowing adventure ensues.

When Man-Arctica comes down to play freeze tag with the kids, they quickly realize he plays by his own rules, freezing everyone in sight.