Home » Lifestyle » Get Fit and Google Now with Moto X
As an Amazon Associate I earn from qualifying purchases.

This past month was my first introduction to “a different” smartphone. I’m a creature of habit (at times) and have a hard time straying from my current phone because, well, it works just fine. However I do love to try new things and I’m a sucker for technology. I’ve had the opportunity to test out the Moto X phone from Sprint. Actually my mother got a chance to check it out first.

It came in handy when a few weekends ago she accidentally dropped her own phone into the ocean. Even though my brother-in-law was able to retrieve the phone. Salt water and electronics just don’t mix. So for a week she was my reviewer for the Moto X. We also had the pleasure of reviewing a Fitbit Flex. 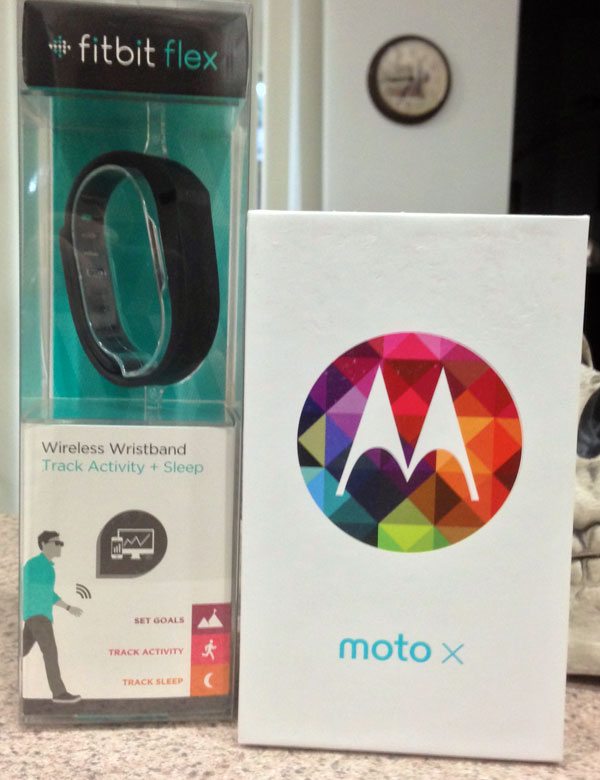 As many of you know I’ve been a Fitbit lover for a long time. I’ve had a Fitbit since they hit the market as one of the first bloggers to do a review. I’ve gone from the original, to the ultra, to the One. The Fitbit Flex has all the same features of the Fitbit One except it is worn as a bracelet. Many people like the ability to see their stats with the twist of their wrist. I personally still prefer the Fitbit One. You can find several reviews I’ve done on the products Fitbit Original, Fitbit Ultra, Fitbit One, Fitbit Flex, and Fitbit Premium Membership. Here are some of the great features of the Fitbit Flex.

I love having my Fitbit synced with my phone. I can easily log and track on the move and it is great when you are on vacation. The Fitbit Flex synced up with the Moto X and worked great with no problems. In fact I’m definitely starting to enjoy the Moto X. I can tell you my favorite feature is the Touchless Control. I will admit when it comes to “talking” to your phone I’ve never had much success. I was a little skeptical about this feature on the Moto X. I was pleasantly surprised to find that the feature worked like a charm. It was easy to set up and now all I have to do is say “Ok Google Now” and tell it what I want and it pops up on the screen. I can get the weather without touching my phone. I can call without scrolling through my phone list. This is probably the feature I’ve been using the most.

I also like the Active Display, it took a little bit of time for it to start working but once it did it was nice. I can easily see all my notifications in one drop down. Or I can see them without even getting into my phone. But just clicking an email icon that will appear when I have email I get a little information regarding the email without opening the application. The phone is also pretty intuitive. If your phone has been in your pocket and you take it out it will flash the time without you pushing a button. Since many of us grab our phone just to check the time I thought this was a pretty cool feature.

I played with the camera a little and found the Quick Capture featured to be both nice and annoying. I found myself taking photos I didn’t mean to simply by touching the screen. However it is also a great feature when taking selfies. You don’t have to find the little button to take a photo but can just tap the screen.