Home » Health/Fitness » Fitbit Zip Review Less Expensive But Full of Features
As an Amazon Associate I earn from qualifying purchases.

It is no secret, here at Shibley Smile,s of my passion for a small little device called the Fitbit. Ironically I turned down the review of this product after having just reviewed a totally different brand that did not impress me. It was my husband that said I should still review it. I’m so glad I did. This is one of my favorite items I’ve had the opportunity to review. Unfortunately I just recently lost mine less then a week ago. Thankfully both the Fitbit One and the Fitbit Zip have been upgraded to keep this from happening.

The new design clips to your clothing and stays there. I know this because I had the chance to review the Fitbit Zip, in fact I received it before it even hit the market. When I heard about the Fitbit Zip the first thing that came to mind was this would be perfect for my son. 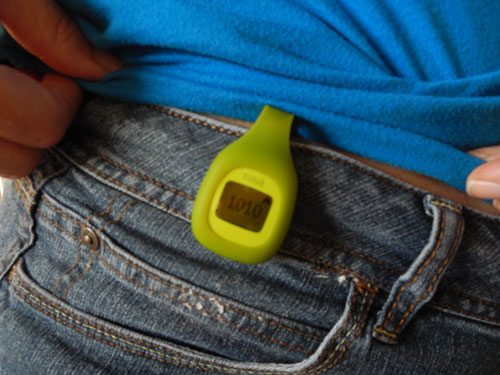 Turns out I was correct. The Fitbit Zip is less expensive compared to the Fitbit or Fitbit One. There are a few features that are not included, but this is a great option for someone that is looking to spend a little less money. The Fitbit Zip does not track your sleeping patterns or climbs like the Fitbit and Fitbit One. It also does not charge, instead it runs on a battery that is said to last 4-6 months. Other then that it does all the same things the Fitbit does.

You still sign up at www.fitbit.com to track your progress. Because there is no charger needed you no longer have a standing device that plugs into your computer but instead you have a very small USB plugin that stays in your computer. Like the Fitbit this syncs with your Fitbit Zip and as long as you are within range your steps and other information will sync to your Fitbit account.

My son was not so sure about wearing it at first, it was not something he wished to display to his friends. However with how small the Fitbit Zip is and the new design he was able to clip it to his boxers inside his shorts and no one was the wiser. Over the weekend we had a friendly competition of who could get the most steps. Since I do my shopping and cleaning on the weekends I pretty much won hands down. However when the school and work day kicked in there was no contest. He had me beat 4 times over. With him riding to school, walking during school, and playing soccer in the morning and football in the evening he easily logged 20,000 steps.

The Fitbit and Fitbit Zip are very motivating if you like to log your progress. I also think this was a great motivational tool to help my soon want to be more active. There are several reporting tools you can access online with your information. However instead of posting them all here again I would like to direct you to my previous reviews of the Fitbit Products : Fitbit Original, Fitbit Ultra, and Fitbit Premium Membership.

This is a great gift for the holidays and we would love to help you out in that department. This late into the game we can’t promise receiving it by Christmas but we can sure try. Maybe this could be a personal gift to yourself. To enter simply fill out the form below.

Disclaimer: I received a Fitbit Zip to review, I was not required to post but it is too good not too. Giveaway sponsored by Fitbit. All opinions are my own. You may read more of my disclosure here.