I’ve mentioned on previous reviews that I really enjoy the Family Movie Night from Walmart and P&G. It seems that each movie just gets better then the one before. Game Time : Tackling the Past premieres this Saturday 8pm ET/7pm CT. I previously gave you my thoughts on Field of Vision and Who is Simon Miller? 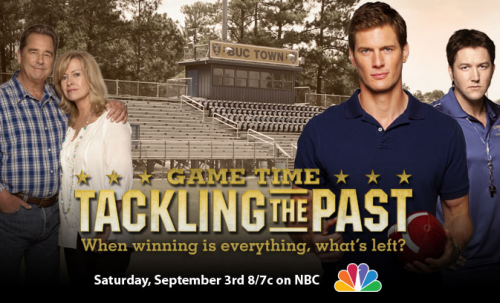 Pro football star Jake Walker is living the dream… or so he thinks. The veteran tight end is a fan favorite and on pace to set the all-time receiving yards record that will guarantee him a spot in the Hall of Fame. While working out at training camp, Jake receives an unexpected call from his brother Dean – their father Frank has suffered a major heart attack. Jake immediately leaves practice and returns to Riverton, North Carolina, the small hometown he’s avoided for nearly 15 years. Memories of glory and regret flood his mind as he returns to the family and friends he abandoned in pursuit of his career. Jake dutifully visits with Frank and Dean, but hurt and misunderstanding from the past begins to resurface, leaving him counting the days until he can return to his team.

A second unexpected call, this time from his agent, delivers Jake another crushing blow. His contract is not being renewed amid concerns about his surgically repaired knee. Suddenly, the life Jake knows is over. To avoid the media circus around this news, Jake reluctantly decides to extend his stay in Riverton. Attempting to make the best of the situation, he begins reconnecting with the community that once revered him. Jake is reintroduced to Sarah, his high school sweetheart, and helps Dean take over their father’s high school coaching job.

Surprisingly impacted by the people around him, the real Jake begins to emerge from behind his armor to see that life is much more than the accumulation of personal stats. But when Jake’s offered a lucrative new contract to play for another team, he is forced to decide whether to go back to the career he thought he loved, or stay in Riverton and embrace the people who always believed in him.

The first thing I noted when I watched this movie is I didn’t feel some of the “cheese” that is strung throughout the previous movies. It appears that each movies acting steps it up just a bit. Having children in sports this movie really resonated with me regarding it’s lesson. Jake, use to being the star, appears to make some poor decisions regarding team play. These decisions may have sent him on the path of football stardom but it isolates him from his family. His trip back home when his father becomes ill is an eye opener for him. I’ve also enjoyed sappy family movies where at the end everyone lives happily ever after.

So I must say that the second thing I loved and this was close to first, is that Ryan McPartlin is nice on the eyes. Yeah, ok so what does that have to do with the movie, all I can say is did you see that smile? Just beautiful. I encourage you to watch the movie with your family, especially if you have children into team sports. As always the Family Movie Night movies deliver a powerful message. Don’t miss another Family Movie Night follow Family Movie Night on Facebook.

“I wrote this review while participating in a blog tour campaign by Mom Central Consulting on behalf of P&G and received a promotional item to thank me for taking the time to participate.” You may read more of my disclosure here.