Home » Blog » Growing Watermelon in Containers at Shibley Smiles
As an Amazon Associate I earn from qualifying purchases.

I have been posting on Facebook every once in a while for some advice on growing watermelon in containers. I thought for a fun totally “what is going on at Shibley Smiles” post we would share our watermelon progress. Towards the end of the school year my daughter’s class started doing a gardening lesson. They created a flower garden at school in memorial of a teacher who passed away and each child was able to plant two seeds to bring home. My daughter chose Zinna’s and Watermelon. After the seeds came home in a small container they were planted into a bigger container. 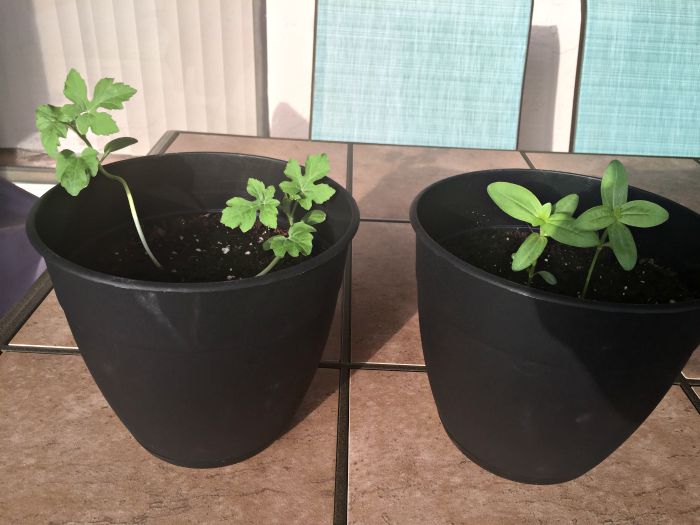 Honey was so sure her watermelon were not going to make it. However it didn’t take too long before we had some nice vines going. Needless to say I knew nothing about growing watermelon in containers. 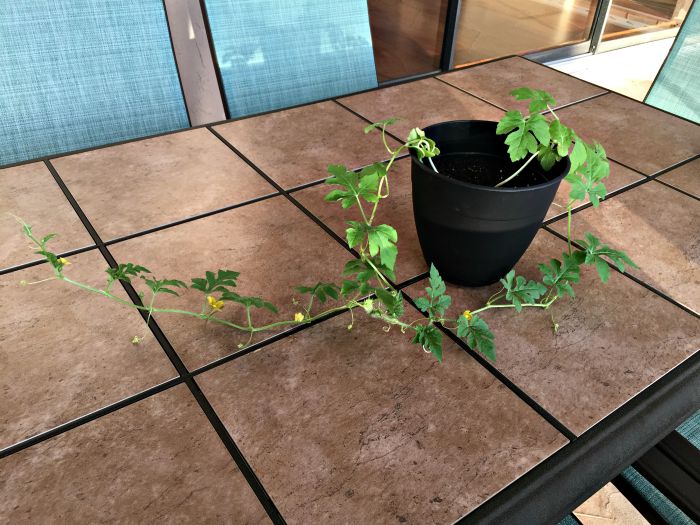 Once we had vines I started looking for flowers. 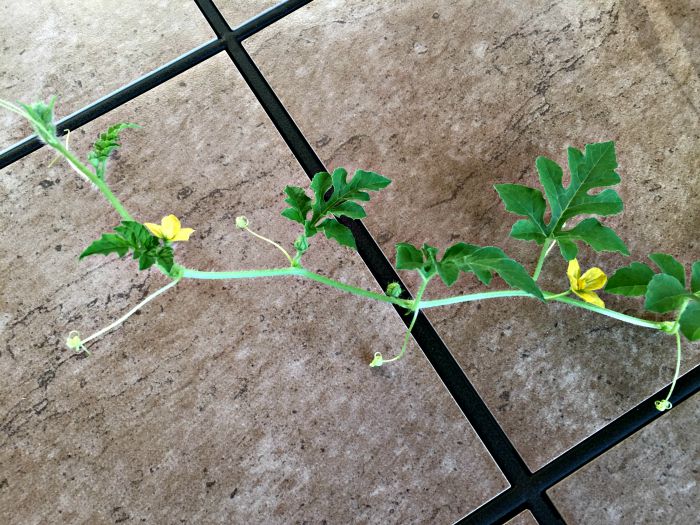 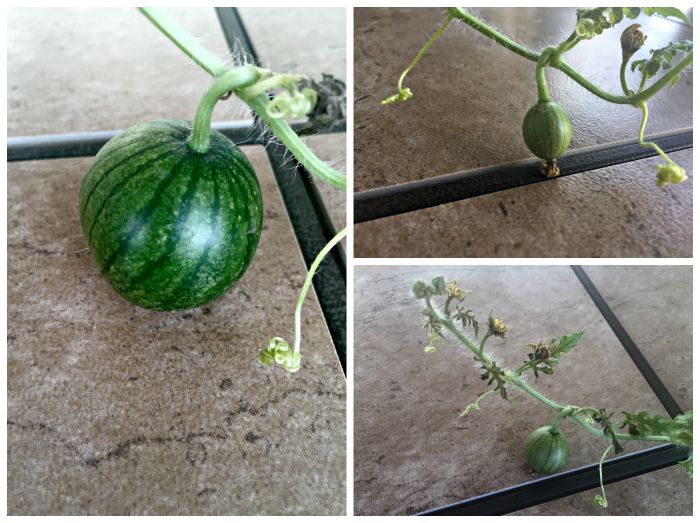 It started out as a small oblong watermelon (right top corner) and progressed to the size of a ping pong ball. However once it got to that size it started turning dark green and stopped growing. I asked my Facebook friends and a few things came to light. One of which was that the pot I was trying to grow the watermelon is was too small. I took to Google again and found I needed at least a 5 gallon pot. 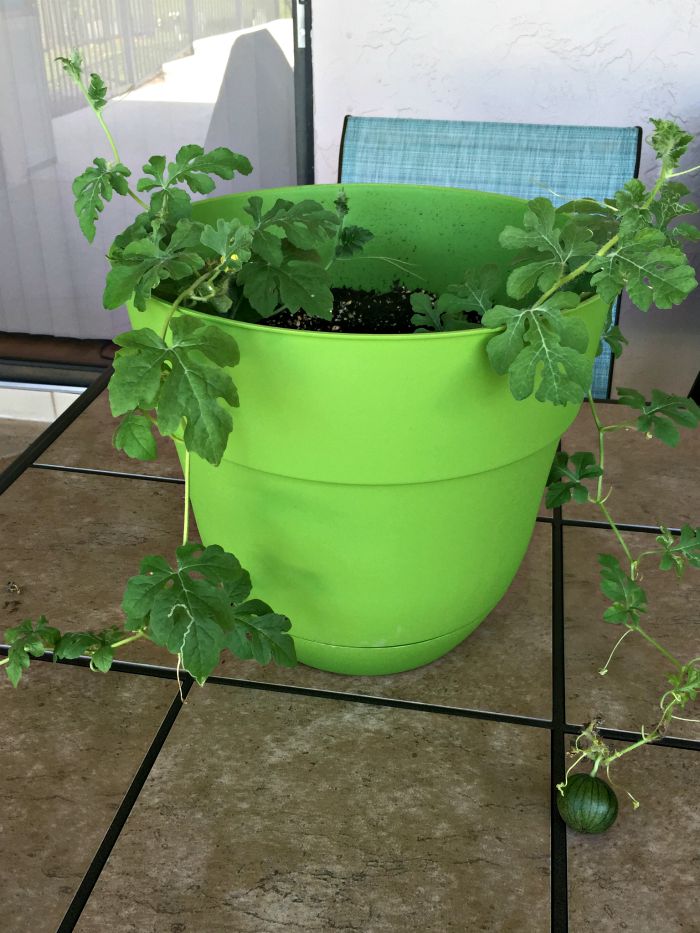 I purchased a much bigger pot and we transferred the vines into the bigger pot. Unfortunately the watermelon never did grow, so we figured it was not pollinated correctly or maybe the small pot had something to do with it. In addition to it no longer growing before I switched pots the leaves were also starting to die. It was obvious by this next photo that the pot size did make a difference. 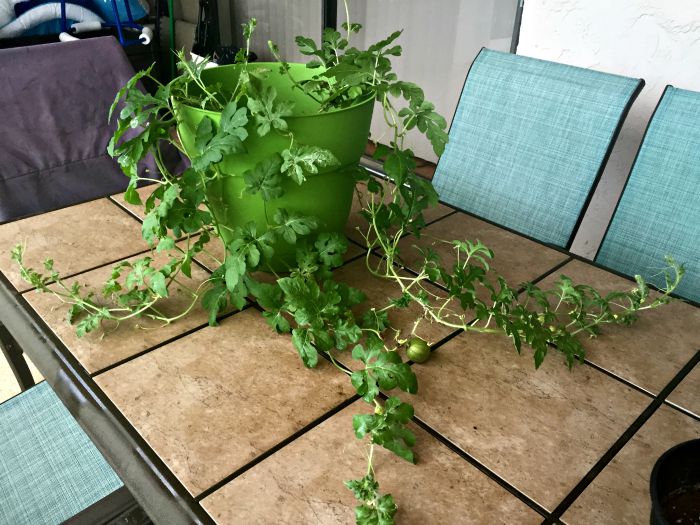 As you can see the vines really started growing. I also added fertilizer at the recommendation of a friend. We started to get quite a lot of flowers and I was pollinating them left and right. We had a few watermelons try to start growing but stop. I ended up moving the watermelon off of the table onto the ground because we started using our table weekly. I picked a spot that was in the sun and you can see how much it had grown. 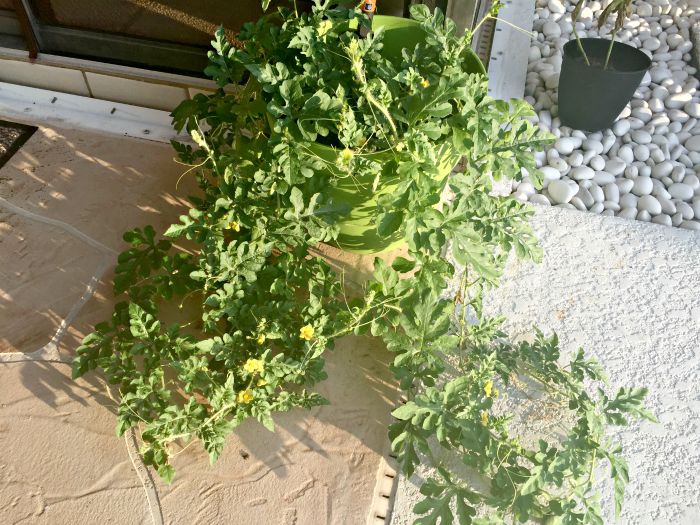 Soon after I started to see a new watermelon take form. It was closer to the top of the vine. When watermelon start growing them seem to grow fast. I took this photo below on 7/14/15, ( I took the photo with me holding it to give a reference for size) 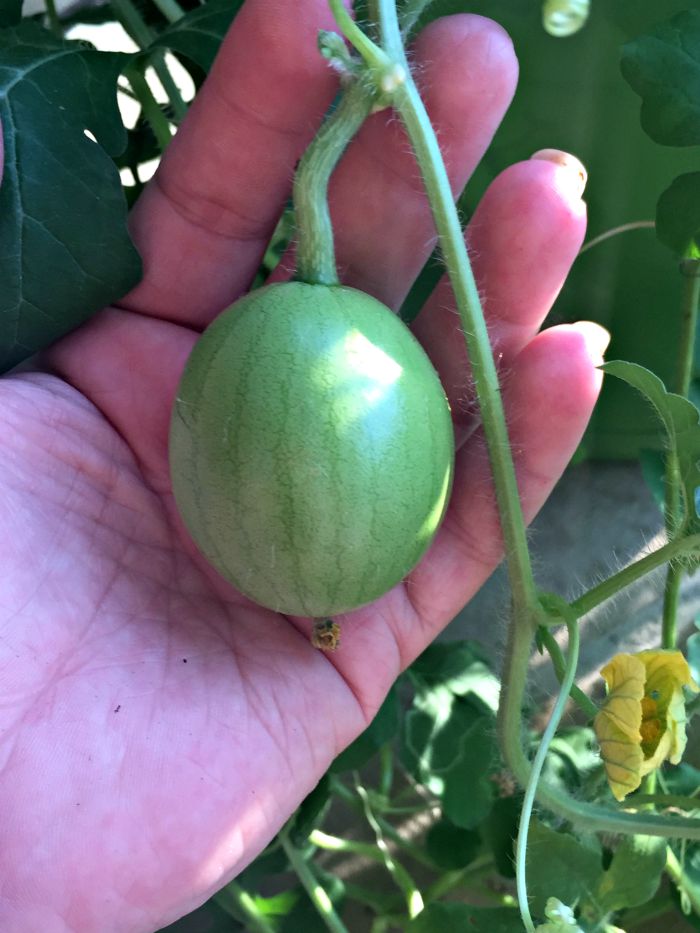 I took another photo on 7/18/15 because I was surprised at the growth. 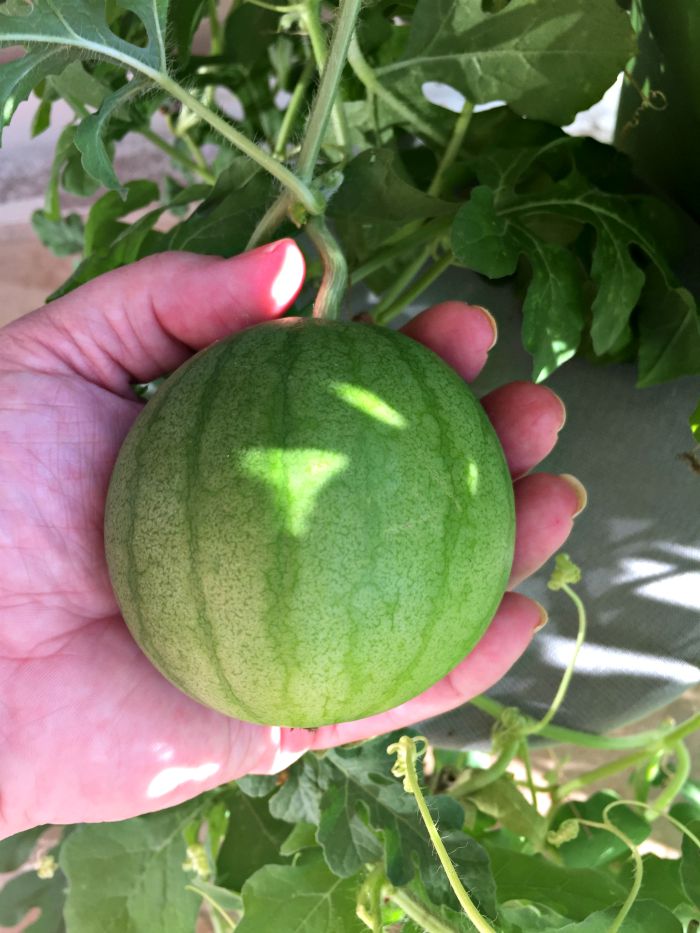 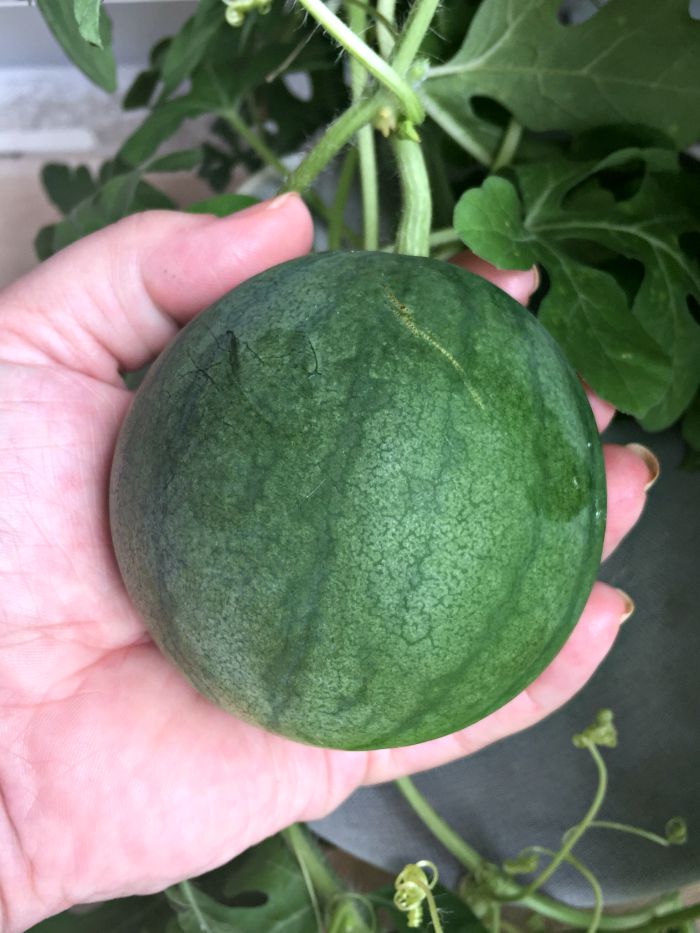 The watermelon was starting to get big and was hanging from the top of a vine so I’ve put a second pot underneath it with a sock on it to cradle the watermelon. In addition another watermelon popped up and grew quite fast.

I have noticed however in the last few days that the watermelon leaves have started to get yellow spots. From what I’ve read this could possible be “powdery mildew”. From everything I’ve tried to read I don’t think it is something I can get rid of. I think that moving the pot onto the ground I put it close to the edge of the patio which means it would get rained on. I would think that wouldn’t be a problem since most watermelon is planted outside where it can easily get wet. I really hope that is not the case but I also feel that both watermelon have stopped growing. They are both dark green and it seems that when they turn green they don’t seem to grown anymore. Here is an updated photo of the watermelon taken this weekend. 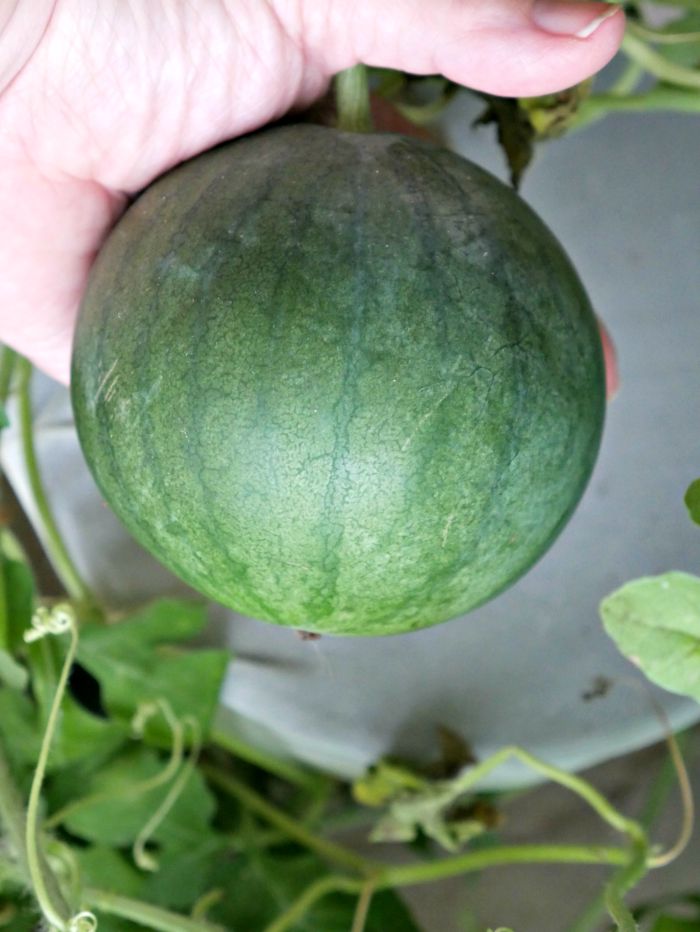 I don’t know that this photo looks any bigger than the one pictured above in my hand. I have done everything I can to try to keep this watermelon growing and whether we get a viable watermelon or not I’m pretty proud of myself as I DO NOT have a green thumb at all. I did move the plant underneath the patio (we were getting ready to get a heavy rain). 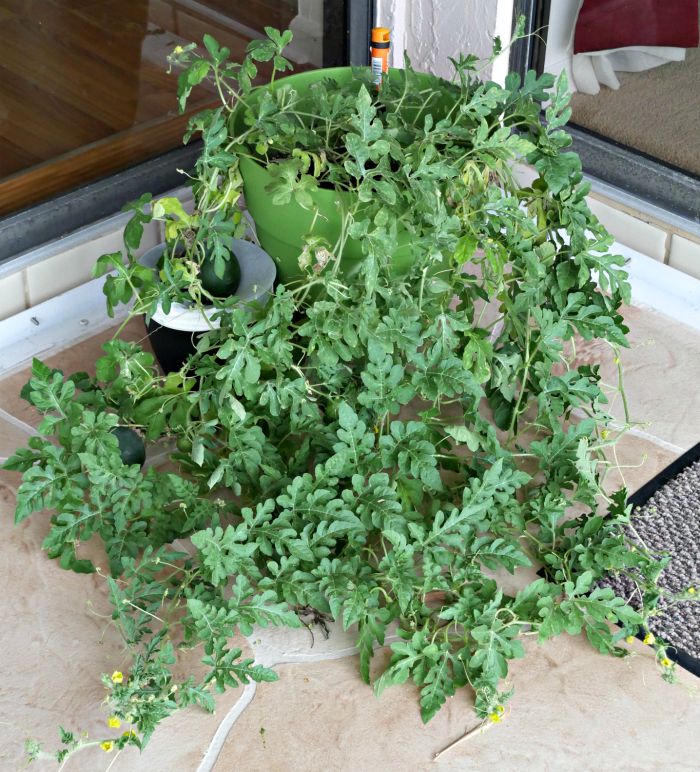 Here is a photo of the yellow spots on the leaves 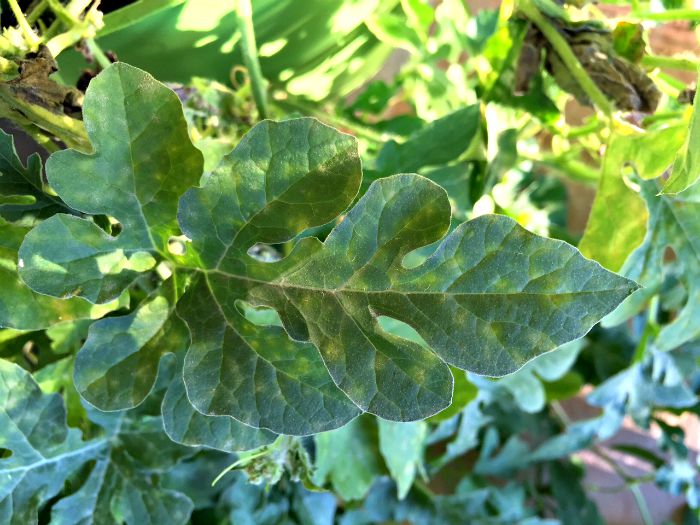 Do you have a garden or grow anything? Feel free to leave any advice!

Related articles across the web