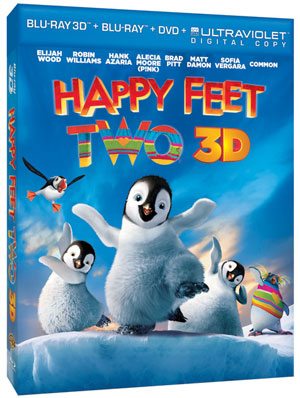 Be sure to check out the free Happy Feet Two movie app for iPhone, iPad and iPad Touch. The app synchs with the Blu-ray disc to provide enhanced content and interactive features. http://bit.ly/zUyBxF

The sequel Happy Feet 2 begins a few years after the 2006 original ended: Mumble (voiced by Elijah Wood) is now married to Gloria (Pink) and the father of Erik (Ava Acres), a chick who’s afraid to dance. When Erik sees the puffin Mighty Sven (Hank Azaria), he decides he can learn to fly: Sven is the leader of a cult that preaches if you believe it, it can happen. An unexplained seismic event causes a glacier to shift, trapping Gloria and all the other emperor penguins: Mumble, Erik, and two other chicks must rescue them before they starve. What begins as a familiar story about a diffident chick quickly becomes needlessly and hopelessly mired in subplots involving elephant seals, skua gulls, human explorers, and a pair of renegade krill (voiced by Brad Pitt and Matt Damon). The motion-capture animation is adequate at best, with snow and water splashing around the dancing penguins to hide the fact that their feet aren’t making contact with the ground plane. Endless tracking shots over the cracking glaciers recall the second Ice Age movie. The vocal performances feature a discordant mélange of accents, with African-American, Latino, and British penguins, surfer-dude krill, Australian seals, and “fugeddaboutit” Jersey Shore seagulls. Even more jarring is the presence of human actors who appear out of nowhere, start to help the trapped penguins, then disappear. The standard-issue poop and snot jokes do little to leaven the nonstop nattering. Happy Feet 2 confirms 2011 as the year of the unnecessary sequel in American animation. (Rated PG for some rude humor and mild peril) –Charles Solomon

The sequel to “Happy Feet”, the Academy Award®-winning animated smash hit, “Happy Feet Two” returns audiences to the magnificent landscape of Antarctica. Mumble, The Master of Tap, has a problem because his tiny son, Erik, is choreo-phobic. Reluctant to dance, Erik runs away and encounters The Mighty Sven – a penguin who can fly! Mumble has no hope of competing with this charismatic new role model. But things get worse when the world is shaken by powerful forces. Erik learns of his father’s “guts and grit” as Mumble brings together the penguin nations and all manner of fabulous creatures – from tiny Krill to giant Elephant Seals – to put things right.

Check out the official Happy Feet 2 Site for some fun games, videos, photos and more. Get your children involved they just might help you earn a few extra points into this fun giveaway!

Disclaimer: Giveaway sponsored by company or representing PR firm. You may read more of my disclosure here.