Home » Lifestyle » Entertainment » Hoodwinked Too Hood vs. Evil on DVD
As an Amazon Associate I earn from qualifying purchases. 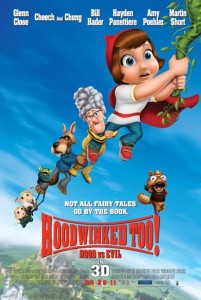 Wolf (Patrick Warburton), Granny (Glenn Close), and Twitchy (Cory Edwards) are on a rescue mission to save Hansel and Gretel (Bill Hader and Amy Poehler) from an evil witch (Joan Cusack). The plan goes wrong however and Granny is kidnapped as well. Meanwhile, Red (Hayden Panettiere) is in training with a mysterious group called the Sisters of the Hood where she learns that a secret all powerful truffle recipe has been stolen. She teams up with Wolf and Twitchy to find the recipe and save her grandma, but she and Wolf can’t get along and the team splits up. Meanwhile the witch, Verushka, who stole the truffle recipe, tries to force Granny into making it for her.

Granny escapes and finds Hansel and Gretel, but learns that they are actually the masterminds behind the plot. Granny is recaptured and learns that Verushka was an old classmate of hers when they were both in training with the Sisters of the Hood; Verushka was always second behind Granny’s accomplishments. Eventually Red, Wolf, and Twitchy team back together and infiltrate Hansel and Gretel’s base. Red accidentally reveals the final ingredient for the truffle recipe and the truffles are made.

This review is from the point of Buddy (14 years old)

I did not have a chance to sit down and review the movie myself. However when I asked the children if they wanted to help me with this review I got a definite YES! I’ve read some of the reviews on the web and must admit it does not appear to give very positive reviews. In depth looks into the plot and characters have come back negative. So this review is none of that. This review is what my children thought of the movie, particularly my 14 year old, so please keep that in mind when reading his review.

Buddy has seen both Hoodwinked and Hoodwinked Too, I asked him of the two movies which did he prefer and without a doubt he said Hoodwinked Too was better then Hoodwinked. When asked why he said the plans were  more devious and interesting. He enjoyed the ending. He is not a man of many words so it was hard to pull much out of him. I asked him to grade the movie on a scale from A-F (like in school). He gave it a B. I asked why it wasn’t an A and he said it was a good movie but not his favorite “kind” of movie. To compare he said an A+ movie would be “Avatar”. He enjoys the action which is why he thought Hoodwinked Too was better then the original, it had a little more action.

Price: The price of $17.49 is about average and what we would expect to pay for a DVD of this nature. This DVD runs for 89 minutes.

Recommendation: We recommend the DVD, or at least my 14 year old does. The movie is rated PG