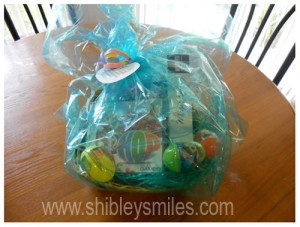 I large box arrived the other day and I was perplexed at what was in it.  Knowing what I was waiting on I couldn’t think of anything that would have been in the size that was sitting on my kitchen counter. 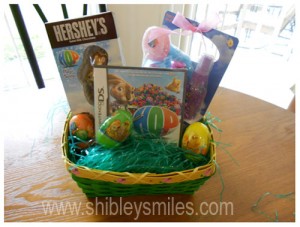 This is what awaited us in the box.  This was one of the nicest displays of thanks I’ve received to review an item.  Instead of simply sending us a HOP : The Movie Nintendo DS Game we received this cute Easter basket with candy filled eggs, a chocolate bunny, and a cute HOP bath set.  Attached was a note thanking us for reviewing the game.

This game is one of our “shared” games.  The boys were ready to take on the challenge of the review but Honey was just as eager.  I asked Honey what she thought after the game and she said it was fun but she needed her brothers help with a few places that you need to be able to read. 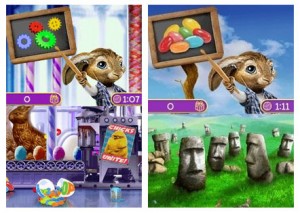 The boys said it was fun and that the point (in their words) is to save Easter by completing different challenges and levels.  The thing about my oldest son is if he doesn’t like a game he has no problem telling me it “sucks”.  That was not the case with HOP, he really seemed to enjoy the game.  All of them are ready to see the movie.

This game is a prefect item to be found in an Easter basket Easter morning and Shibley Smiles gives it a big thumbs up!

Agoura Hills, CA—March 31, 2011— Easter baskets will have more than just candy this year! 505 Games, a global interactive game publisher, announced today that Hop: The Movie Game is available now exclusively on Nintendo DS™ in stores everywhere for just $29.99 USD. Hop: The Movie Game is a top-down action adventure game that brings many of the locations and characters from the movie to life in an interactive and entertaining setting that’s perfect for gamers of all ages! The game is based on Universal Pictures and Illumination Entertainment’s upcoming live action/CG animated comedy Hop, which opens in theaters on April 1, 2011.

“Hop: The Movie Game is the ideal basket-stuffer for anyone on your Easter list, and with dozens of missions, varied gameplay and colorful graphics, will last much longer than a chocolate bunny,” said Ian Howe, president of 505 Games. “It features the same hilarious comedic sensibilities of the film, and since it’s on the Nintendo DS, it’s the perfect game for the little ones to play over spring break and on any Easter road trips.”

Play as Fred as you help the Easter Bunny’s teenage son, E.B., save Easter from a fluffy coup d’etat led by Carlos and his fellow chick workers! Hop your way through the Easter Bunny’s top-secret candy factory on Easter Island, solve puzzles and sugar shock your enemies as you turn them into delicious chocolate treats. Play through various mini-games and game modes, including helping E.B. realize his dream of becoming a famous rock-’n’-roll drummer!

Hop: The Movie Game Features Include:

« 5 Side Effects of Eating Healthy
Nutrisystem To Be Continued… »