Home » Giveaways » I Don’t Know How She Does It Giveaway (ARV $75): (Ends 1/15)
As an Amazon Associate I earn from qualifying purchases. 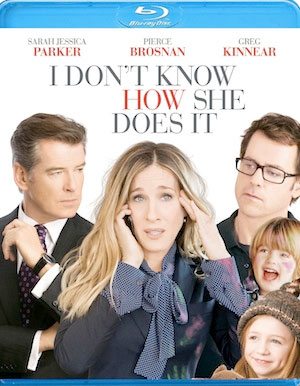 I DON’T KNOW HOW SHE DOES IT on Blu-ray™ and DVD on January 3, 2012. The highly relatable romantic comedy stars Sarah Jessica Parker (Sex and the City) as Kate Reddy, a wife and mother trying to balance her career and her family life with hilarious results! The film also stars Pierce Brosnan (Die Another Day), Greg Kinnear (Little Miss Sunshine), Christina Hendricks (“Mad Men”), Kelsey Grammer (“Boss”), Seth Meyers (“Saturday Night Live”), and Olivia Munn (“The Daily Show with Jon Stewart”) and is directed by Douglas McGrath (Emma, Infamous). Bonus features include a conversation with the bestselling author of the book, Allison Pearson and much more!

NBC’s ‘Moms & the City’ call I DON’T KNOW HOW SHE DOES IT “a hilarious comedy about having it all” and “the perfect film for a girls night out!”  The New York Daily News’ Elizabeth Weitzman describes the film as having “plenty of humor and poignancy”, while SHAPE magazine’s Karen Borsari calls it “hilarious!”  Finally, New York Magazine’s David Edelstein proclaims, “Sarah Jessica Parker reminds you what an all-in, high-risk comic actress she can be.”

Trying to balance work and family is a non-stop juggling act for Kate Reddy (Sarah Jessica Parker).  As a determined Boston-based finance executive, she devotes her day to her job and her night to her adoring husband Richard (Greg Kinnear) and their two young children.  In between conference calls, meetings, deadlines, and her daughter’s school bake sale, Kate manages to survive on a daily basis.  But when she gets handed a major new account that will require frequent trips to New York, and Richard also wins the new job he’s been hoping for, both will be spreading themselves even thinner.  Complicating matters is Kate’s charming new business associate Jack Abelhammer (Pierce Brosnan), a handsome executive whose unexpected emotional support becomes a source of refuge.

The I DON’T KNOW HOW SHE DOES IT Blu-ray™ and DVD bonus features include a conversation with bestselling author, Allison Pearson.  Note: Special features are subject to change.

To help prepare you for this funny comedy one lucky winner will win their own “Mom On The Go” Gift Pack! 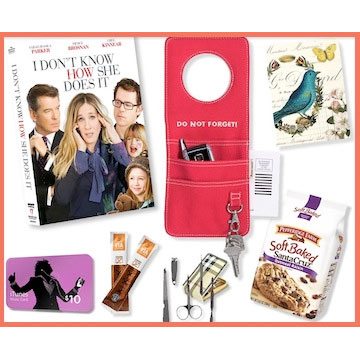 The Mom On The Go Kit includes:

Disclaimer: Giveaway sponsored by company or representing PR agency. Opinions are my own and NOT influenced by monetary compensation. You may read more of my disclosure here.

« Do Your Kids Eat Like This?
Where Do You Store Your Ketchup? »