Home » Lifestyle » Entertainment » Movies » Jake and the Never Land Pirates DVD
As an Amazon Associate I earn from qualifying purchases. 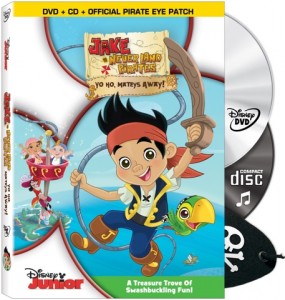 BURBANK, CA, July 28, 2011 – A new soundtrack and DVD inspired by Disney Junior’s #1 series Jake and the Never Land Pirates, are planned to set sail this September with Walt Disney Records’ album release of eighteen hook-filled songs from the series on September 20 and The Walt Disney Studios “Jake and the Never Land Pirates: Yo Ho, Mateys Away!” DVD release featuring seven episodes from the series on September 27.

Jake and the Never Land Pirates is cable’s #1 series among Boys 2-5 and is on track to be Disney Channel’s #1 preschool series ever. It is the most co-viewed series among all Disney Junior and Nickelodeon series, with 47% of Moms watching with their preschooler. A music-filled interactive treasure hunt, the series introduces a crew of kid pirates – leader Jake and pals Izzy and Cubby – and follows their Never Land adventures as they work to outwit two infamous characters, the one and only Captain Hook and Smee, from Disney’s classic “Peter Pan.” Every episode features the animated Sharky and Bones characters as they pop up throughout to perform original pirate ditties, and each episode concludes with a live action music video featuring The Never Land Pirate Band.

About the Album Release:
Written and performed by Loren Hoskins and Kevin Hendrickson, a.k.a. Sharky and Bones of The Never Land Pirate Band, the album features 18 swashbuckling tracks sure to thrill any young pirate. Also included are downloadable activities and games to plan the perfect pirate party, a Sing-Along version of the show’s theme song and a bonus track from a future episode. The deluxe edition includes a pirate bandana. The album arrives at stores and online retailers September 20.

The album features a variety of songs that kids and parents can enjoy together. Songs include the kooky, comical “Hot Lava,” “Aw Coconuts,” “Pirate Password,” and the arrrghhh-rated “Talk Like a Pirate.” Some songs refer to popular characters in the show, such as “What’s Cookin’ Smee,” “Captain Hook (Is A Cranky Crook),” “Tick Tock Croc” and “Bucky’s Shanty.” Others capture the island spirit of Never Land, such as “Castaway on Pirate Island,” “Shipwreck Shuffle” and “Never Sky,” as well as the “Jake and the Never Land Pirates” theme song. All songs can be heard in episodes of the show.

Portland, Oregon-based Hoskins and Hendrickson have been creating pirate rock music for kids of all ages for more than a decade. The duo produced four previous children’s albums and even led their own pirate band. The pirate rockers also provide the musical score for “Jake and the Never Land Pirates.”

The Jake and the Never Land Pirates soundtrack will be available wherever music is sold on September 20. For more information on Walt Disney Records’ releases, please visit www.Disney.com/music, become a fan at www.Facebook.com/disneymusicor follow us at www.Twitter.com/disneymusic.

About the DVD Release:
On September 27, The Walt Disney Studios will be releasing Jake and the Never Land Pirates: Yo Ho, Mateys Away!, a DVD packed full with seven episodes from the series and two incredible bonus features including Yo Ho, You Want To Be A Pirate?, where Jake teaches viewers how to talk like a pirate, and Pirate Party With Pirate-oke, a collection of music videos performed by The Never Land Pirate Band that allow viewers to enjoy with or without the sing-along/karaoke-like feature.

Retailing for the suggested price of $19.99 in the U.S. and $24.99 in Canada, the Jake and the Never Land Pirates: Yo Ho, Mateys Away! DVD also comes packaged with a bonus 7-track CD sampler and a pirate eye patch.