Johnny Test from 505 Games was released March 29, 2011. The boys and Honey got the opportunity to review the game and despite the plan graphics they really seemed to enjoy it.  Unfortunately that can’t really give me an idea of what exactly they like about it just that they do.  This seems to be a game that even my 5 year old can comprehend so it does seem to be age appropriate for all three of my kids with age ranges of 13-5. If you would like a little more in depth as to what to expect in the game I found this review by WiiLoveit.com that goes into more depth as to the actual game play.

Despite my little knowledge of the game itself I will say that I did notice the children playing it often within the first week of reviewing.  Each of them taking turns and passing it from DS to DS including Honey.  I also can say that Johnny Test is one of the few cartoons these days that seems less violent and age appropriate.  It is nice to find a game that is simple, and grabs the attention of my children without knives, guns, and swords. For that I give it an A+. 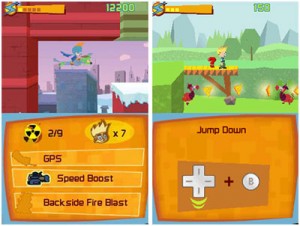 Though this may not be the game the boys come back to time and time again,  for $25.99 at Amazon I believe the game has captured Honey’s time and attention enough to be worth the price.  In addition I love to watch how the children take turns getting from level to level depending on the skills of each child to advance them further in the game. Any game that can capture the interest of all three of my children at one time is priceless.

« Give Your Child the Best Teacher For Them with Kidzmet
Nutrisystem Update : Week Two »