Home » Giveaways » JumpStart.com Virtual World, More Than Just a Game Review
As an Amazon Associate I earn from qualifying purchases.

Since my oldest son was in first grade I have been a HUGE fan of JumpStart by Knowledge Adventure. My son had a very hard time with reading in 1st grade and I was told he was not on track to pass. So along with the Hooked on Phonics

program I wanted to supplement his learning with some fun games. We had just recently purchased a gaming system (can’t even remember what the name of it was since it is no longer made) and I found that he was great at them and they really seemed to grab his attention. So I went out and purchased my first of MANY Jumpstart PC games. Such as JumpStart Spelling 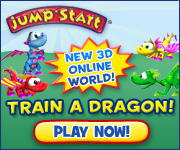 It wasn’t actually until I started blogging in July and began seeing giveaways for JumpStart .com Virtual World that I knew that such a thing existed, between that and the Jumpstart Get Moving Family Fitness Wii

I was amazed at how far JumpStart had come from my first purchase so many years ago.

Jumpstart.com is designed for ages 3-through 5th grade (10-11). With my complimentary membership I decided to give the site a whirl with my daughter who is 5. A little background on my daughter. She has known how to work a computer since the age of 2 1/2. One day she wanted me to help her with a game and I was busy cleaning so she took it upon herself to learn how to use the mouse. She has a computer in her room and has her own bookmarks and gets on and plays without out any help from me. At 5 she is very computer literate.
We “jumped” onto Jumpstart and set up her avatar, unfortunately we messed up the name part and have been unable to figure out how to change it so her name is Dylan. Dylan with a pink skirt! Once this was done we started browsing the world. I absolutely love the virtual world. There is no way you could ever get bored with all there is to do. It appears to be a large world that then contains small sub lands within in such as AdvetureLand, MarineLand, and a new release called Enchanted Sanctuary where kids can hatch and raise their own dragon. 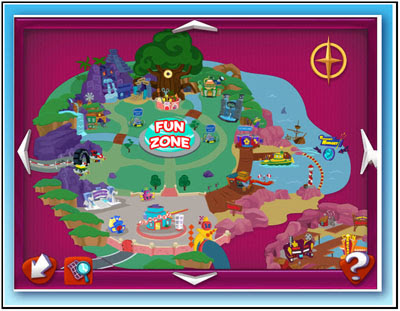 We entered into the world on what appeared to be a snowy day. As I was navigating around with my daughter we ended up going through a small portal that ELFed us. We came out dressed as a cute elf. Honey thought that was the coolest thing. 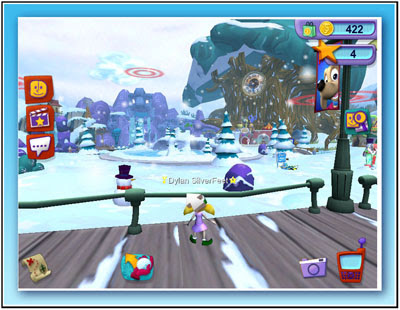 After that we ended up taking a slide that landed us in MarineLand and we pretty much have stayed there. 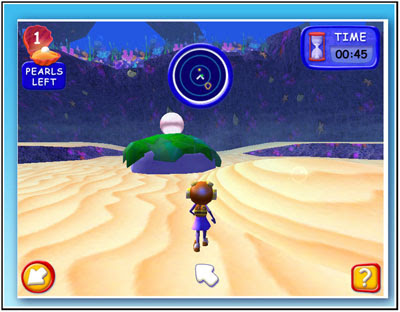 My daughter knows that when she gets 15 sand dollars she gets a mermaid tail so that is her main goal right now. 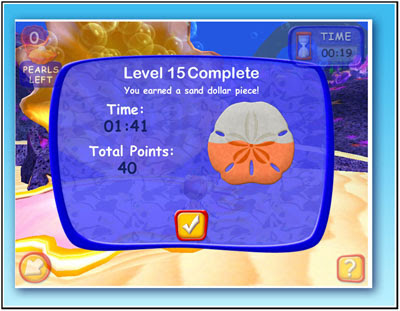 The thing that was great is we played together. Taking turns trying to meet the challenge to receive our sand dollar. It really was a great time for the two of us to bond and enjoy. each other We have only scratched the surface in one small corner of JumpStart.com. There is more to do then I could write about. As you enter each land it gives you a heads up to the age range the land is intended for. I can’t say enough good things about my experience so far.
In addition to the virtual world online there are also some downloadable games so you don’t always have to be connected to play. I’ve already begun the process of downloading them and having completed one I took a quick peek. The game is just as amazing as the virtual world and PC games you can purchase. JumpStart is my #1 choice for children’s software. It has been my #1 choice since my son was little. The virtual world that is offered is just icing on the cake.
I have been recommending JumpStart to my family and friends for years. When my sister had her son and was looking for something to help get him started with the computer I mentioned they there was a JumpStart Pre-School game that would be perfect for him. JumpStart has a way of teaching your children without them even realizing they are learning, from numbers to alphabets, from phonics to shape recognition. They always manage to zone right in to what your child would enjoy. Such as the FutureLand that is geared towards older children from 3rd through 5th grade.
If your child loves to play on the computer, if you love to play on the computer with your child, or if your trying to figure out the best way to introduce computers to your young child you can not go wrong with JumpStart. I know I sound like a walking advertisement but when you truly are passionate about something it is hard not to praise it! Long before I began blogging I was a fan of JumpStart.

Beyond all these already great features there is a parent feature that comes with your membership. Here you can check on your child’s progress on the progress report. It will actually measure for you how well your child is learning key learning elements. You can check out the buddy list feature in which children can produce buddy codes and invite their friends. You can also connect through facebook. If you really want to keep up on what JumpStart has going on there is also the JumpStart Blog that is very informative.

Disclaimer: This is my honest opinion. I was provided with a JumpStart membership at no cost by Knowledge Adventure in order to test the products’ abilities and give my own personal opinions on it. The opinions I have given are mine and may differ from others but were not influenced by the company or the free product provided.. You may read more disclosure details here.