Home » Lifestyle » Everything Else » Justin Bieber Never Say Never Movie Review
As an Amazon Associate I earn from qualifying purchases. 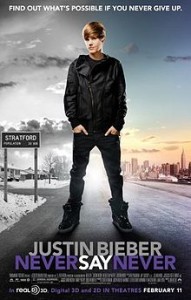 I have to say of course I have heard of Justin Bieber I don’t know of many people that haven’t.  At the age of 37 however I really didn’t get the Justin Bieber Fever that swept the nation.  I was especially surprised that my 5 year old daughter was falling all over him, and she didn’t even know who he was, what he did, just that she LOVED a photo of him on a magazine.

Honey and I had a chance to review the move Justin Bieber “Never Say Never“.  We have had it for about 4 days now and I think she has watched it a total of about 6 times.  I promised her I would sit down and watch it one time with her. So that is what we did tonight after dinner. We cuddled up in her bed and watched the movie.

I was pleasantly surprised with the movie. It is not an exciting edge of your pants thriller, a comedy, or a romance it is what it says it is a documentary of the rise of Justin Bieber.  I had no idea that he was discovered on YouTube. Maybe I’ve been living under a rock.  I was very impressed with the commitment on Justin’s part to break into the music business.  After watching the movie I can now see what the hype is about, it is about Justin’s charisma and personality.

He reminds me some of my youngest son who isn’t afraid to talk to anyone and will win  you over in a matter of minutes with his caring nature and cute little smile.  This is what Justin has that girls love so much, his cute smile and charming personality.

The road to his fame was not handed to him nor did he sit back and let it happen.  There was no discovery and then a hit.  It appears no one wanted to take a chance on a young boy, saying there was no market for him.  However that did not stop his manager and Justin for plugging along and forcing people to notice.  What I found even more interesting, especially from my line of business is the part that Social Media took in launching Justin Bieber.

That is what Justin did! He began to use twitter to tell his fans where he would be as he toured the nation hitting every radio station.  As fans began to multiply it was obvious that there was a market for Justin Bieber.

I found the movie interesting and entertaining. I believe fans of Justin Bieber will enjoy the movie. It is not an acting debut it is a documentary.  Very smart on someone’s part to document everything as it was happening.  I was interested to learn what the hype was about and find out why my daughter’s eyes gloss over when you say his name. She was beyond excited when the movie arrived. I asked  her once what she liked about him and she had no idea. We have concluded that she thinks he is “cute” and she LOOOOVES him!

As a mother I loved that Justin’s own mother was in the documentary and as I watched him perform and make his way I could almost feel the pride that swelled up in his parents. To have a child with natural talent and then watch their dreams come alive is all that a parent wants for their child.

What I wouldn’t give for tickets to a show of his, just to see the smile on Honey’s face.  I recommend the movie for fans and those that are interested in seeing how a star was born.  My hope for Justin is that the people that are surrounding him are able to maintain what they said their goal is. To keep him grounded and help him grow to be a mature and well adjusted adult. I know that is not always easy when thrown into the entertainment business so young. I wish him the best of luck in his career.

I now feel the need to purchase a Justin Bieber CD!

Follow up Note: My daughter wants to know when there will be another Justin Bieber Movie and my 13 year old son thought a lot of the girls in the audience were “hot”.