Yes you read that right Real Steel was #1 in the box office this weekend Oct 7-9 after it’s release on Friday. Not only was it number one but it blew away the competition at 27.3M compared to the second place The Ides of March at 10.4M. I must say I’m so excited to have been part of spreading my thoughts about the movie to others. It so deserves the spot and I hope it continues to draw in viewers.

I took my mother, husband, two boys, and daughter on Thursday for a pre-screening of the movie and was very anxious to see what they thought about it. I was afraid I had talked about it so much it wouldn’t live up to my praise. My mother said it was good and thought it was definitely like “Rocky”. I guess even though I know I’ve seen the Rocky movies they were a little before my time so I really don’t think of the two as the same type of movie at all.

My boys really enjoyed it and said it was “AWESOME”. My youngest son said it was the best movie he has seen in a long time. My oldest said it was good and he can’t decide if it was the best movie but it must be close to the top since he “can’t decide”. I asked them both who was their favorite robot and neither could give me an answer. I was quite surprised however to my youngest son’s answer to the question, “What part was your favorite?” I expected to hear one of the robot battles but instead he said.

Wow to me that is pretty deep for an 11 year old. That scene embodies the movie as a whole. I was shocked that he “got it” so to speak and even felt it was the best part of the movie.

My daughter admittedly was a little antsy during the non-action portions of the movie and even was just a little bit intimidated when the robot battles began but once they did she was mesmerized by them and I found her chanting with the movie screen crowd and clapping when a robot won. In fact there was actually quite a lot of clapping in our theater. I would have loved to have heard what everyone thought. When I asked her what her favorite robot was she replied “Noisy Boy” 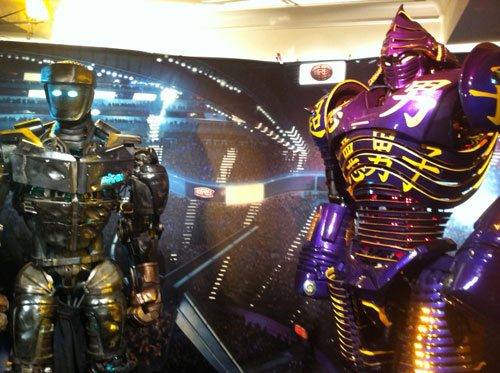 My sister really had no intentions of taking her family however listening to me go on and on about the movie she decided that it would be worth the time. She called me just last night to tell me she had seen the movie. Turns out my review was “right on” she said that she liked the movie and her husband said it was the best movie he had seen with their son. So the “ family” audience the director was looking for was “spot on”. My nephew thought it was “AWESOME”. When I asked what his favorite robot was he said the same as my daughter “Noisy Boy”.  So I send my sister the above photo via text. This was a photo taken on my trip to LA for the Real Steel press junket. These are “the” robots used for a few shots needed in the movie. Despite the majority of the robot scenes being CGI there was a necessity for the “real deal”.  Anyway when he saw the photo he looks at his mom and says.

“Man, I SOOO gotta meet them!”

He called to tell me that he wanted to meet them he always wanted to know why Ambush was not in the photo. When I explained he was on tour somewhere else he questioned me as to where. He is a very inquisitive and bright kid.

« Support Recess at Your Local School with : Danimals Rally for Recess
#Tweet4Seat Enter to Win a $3000 uAstro Massage Chair from Brookstone »