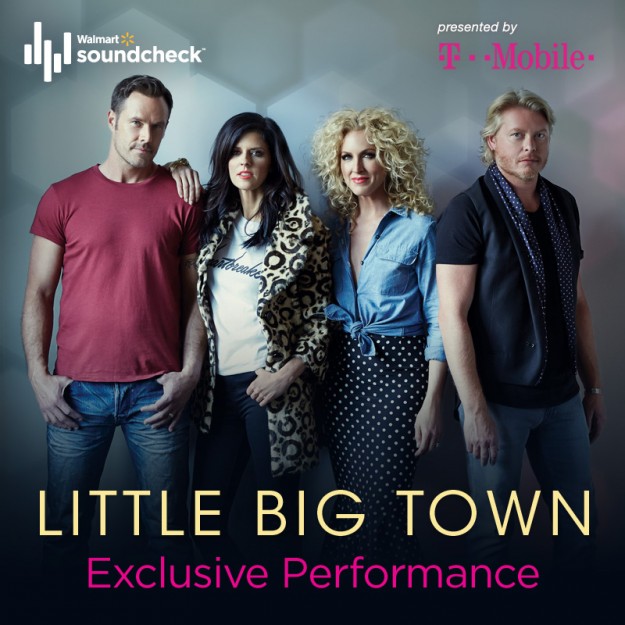 Little Big Town is a platinum-selling country music vocal group that formed in 1998 and has shown no signs of stopping since. The group’s style is four part harmony reminiscent of The Mamas and the Papas or Peter, Paul, and Mary. Little Big Town is comprised of Karen Fairchild, Kimberly Schlapman, Jimi Westbrook, and Philip Sweet with each alternating their vocals as lead singer. They have had an amazing 14 songs on the Billboard Hot Country Songs charts. The group has released six albums with the newest album Pain Killer recently hitting the shelves in October, 2014. Pain Killer includes songs such as “Day Drinking” which is an anthem for having fun as well as “Pain Killer”, “Quit Breaking Up With Me” and others.

Walmart’s Soundcheck is working with Little Big Town, their artist-of-the-month, to promote Pain Killer with a three episode series. Each week a new episode will be released including a live performance and featuring an interview where the artists share their take of the new album. The first episode is commentary on the song “Day Drinking” and more on the album. The second episode focuses on “Boondocks” and the third deuted 11/4 called “Pontoon, Stay All Night”.

“It’s aggressive. It’s bold. It’s brave. It has it’s own personality, this record did. We wrestled it to the ground says Karen Fairchild of their newest album.

She then explains that the idea for the title came from the song of the same name and says it’s still a party album. Kimberly Schlapman says if she were to describe the album in terms of food, it would be extra large or super sized. Having watched each episode I have to say I’m in love with the music it seems soulful and just has a very relaxing and fun beat.

Head over to Walmart’s Soundcheck to catch up on the episodes and interview and get a glimpse of the band’s thoughts on Nashville and their song writing process. Remember to get your entries in for the chance to win an autographed Little Big Town guitar from this Grammy award winning group.