This is going to be a post about a little of this and that from the past week and weekend. It was a great weekend as it was the first weekend in some time that I actually had a little time. The past 3 weekends were filled with soccer games, baseball games, moving (my mom), pumpkin parties, Halloween, and birthday parties.

This weekend was free of baseball games. I have not been updating on “Thunders” stats (Nick’s team). I don’t actually know what their overall win-loss record is but for the most part they tend to be winning the game up until the last one or two innings and then the other team tends to sneak up and win. Nick however has played awesome at first base and just this past Wednesday for the first time got to play catcher. It seems to be his new favorite position. I personally think he is more valuable on first but he seems to love catching. For never even putting on a catcher’s glove, no practice at all, he did pretty good.

We did have a soccer game, our last one of the season actually. Buddy played well, he looks like such a small streak of lightening compared to his overly tall players. Buddy is a little on the smaller size and sometimes seems when he gets around his soccer team he seems even smaller. He is fast though, so in that aspect his size does him well. He is aggressive and enjoys the game. Unfortunately they did end on a losing note but it was an awesome game it was tied 2-2 right up until the end when the other team managed a goal.

For interesting news, at least to me is that Buddy decided to get his hair cut this weekend. He was tired of all the hair in his face and has been wanting to get it cut for some time. I think I was more nervous then him. The girl talked him into what she labeled as a “surfer” cut. He seems to really like the new look and he says it feels so much lighter. Since he NEVER likes to brush his hair I think this will work in his favor. I’m still undecided and these photos don’t help, he just looks happier in the before. I do like that they really took some of the weight off and actually the before photo was taken in June. I don’t know I’m just not sure, I do think it makes him look older, but I guess the thing is he likes it (his girlfriend was not happy to learn he was getting it cut) Here is a before and after: 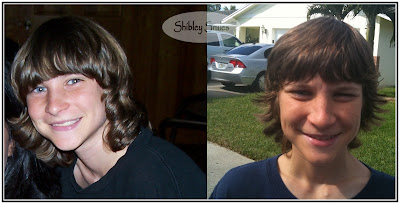 In the Honey front she cracks me up sometimes. One of her new things is washing her face at night with me. She started coming in some time ago when I was washing my face for the evening and of course wanted to wash hers as well. Now EVERY night and I do mean every, with out fail, she will come out and say are we going to wash our face yet? Or come get me when we can wash our face. I’m happy to know I’m instilling a good habit in her, it was not something I was always good with when I was young.

Well that is a lot for one post so Happy Monday to all!