Home » Blog » The Melt Down : The Biggest Loser Finale (LA Trip Part 6)
As an Amazon Associate I earn from qualifying purchases.

Overall our trip to LA was AWESOME! Despite the 7 hour delay in Dallas and the inability to roam the city the experience as a whole was exciting. I’m thrilled to be able to say I attended a live Biggest Loser Finale and that I traveled across the country.

I mentioned we did some shopping for the kids during our trip to City Walk at Universal Studios Hollywood.  One of the things we picked up was a snow globe for one of the kids. I was really excited about this particular gift that my husband found. This little item here caused quite a lot of emotions at the airport (will not this exact item). 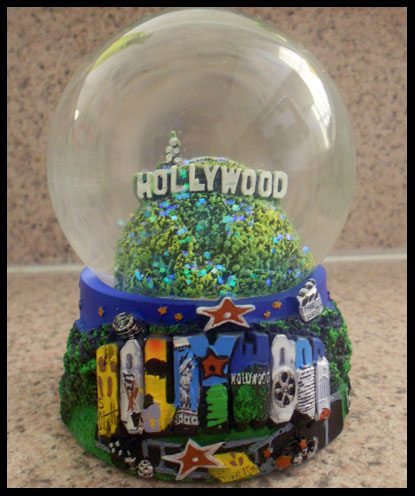 The dilemma began in the hotel room as we packed up our things to get ready to make our way back to West Palm Beach.  My husband wrapped up the snow globe in a shirt and was placing it in the suitcase. I had tried this trick once before with a item and knew that it didn’t always work. I would have been heart broken if I had gotten home only to find a broken snow globe.  So I said lets just take it in our carry on. Do you know where this story is going yet….

We actually debated about it for some time as I was a little nervous that they wouldn’t let it through. I reasoned with myself that it is a closed item and they let a lot worse go through so we should be fine. Sounds reasonable don’t you think?

Yes let me just rephrase that so it makes perfect sense. I was told I could NOT take the snow globe on to the plane because they couldn’t verify where the liquid came from. However if I had 3 oz or smaller size shampoo or mouthwash bottles that I could fill with let’s say acid or some other dangerous liquid I could take those on just fine. SERIOUSLY!!! I can’t take a snow globe that I bought for my child while on vacation on to the plane?!

I had a melt down right there, I started bawling. I mean I couldn’t stop it I was so upset. I debated with him for some time, why I have no idea I knew logically it was useless. He said the only thing I could do was go check it into baggage. Really?! How the heck was I suppose to do that? Our baggage was already checked in. He asks me, “Didn’t they didn’t give you a box?” I about laughed and wanted to say to the guy, “Do you really think if I put this thing in a box and put it through baggage claim it would come out on the other end in one piece?”. This guy has obviously not watched a group of baggage handlers load baggage on a plane. I think they get an award for who can throw the baggage the furthest, who can flip the baggage more the once before it lands, and who can consecutively land the luggage upside down to get the most breakage.

Once the guy made a comment that I could buy a snow globe in the airport gift shop, I just couldn’t take one through the security scanners I calmed down. I’m still upset that I had to forfeit my snow globe (which I secretly think they will end up reselling in their gift shop). However I was able to purchase a similar one (pictured above) for my son. I don’t know the difference between the one we purchased and the one the airport will be reselling in their gift shop, but my husband says there was. In the end my son got his snow globe, I will never buy a breakable souvenir again, and I refuse to ever fly American Airlines on my own dime.

However I promise you it really was a fun, exciting, and fascinating trip. I learned a lot of do  not’s along the way. It will just make our next trip even better. If I’m lucky that may include a trip to San Diego for BlogHer 11′.