Easter Sunday the family and I ventured down to our convention center to see Disney Live! Mickey’s Magic Show. Sadly I have to say I’ve never been to “shows”.  It is not something I usually splurge on and I don’t recall going to any as a child.  So I knew this was going to be a new experience for me as well as one for the kids.  Thankfully it was only 20 minutes away (much better then Saturday’s adventure). We got there a good 30 minutes early just to be safe and were very pleased with our seats.  We were in the 7th row smack dab in the middle, perfect for viewing the show. 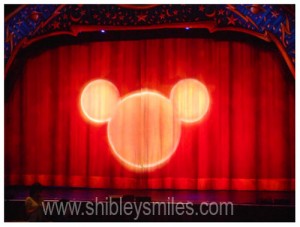 The boys played their DS and Honey played with my phone while we waited for the show to begin.  When they announced they would be starting soon Honey decided to count down the minutes. I showed her the clock on my phone an explained how many minutes were left and when each minute passed then she was to take away one minute.  When she got to zero she was super excited.  Her face lit up when the lights began to dim.  I was unable to get any photos of the actual show due to photography restrictions.  So you are stuck with photos of the “Shibley Smiles”. 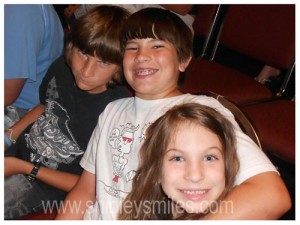 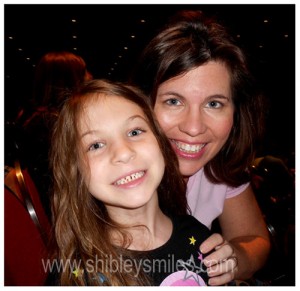 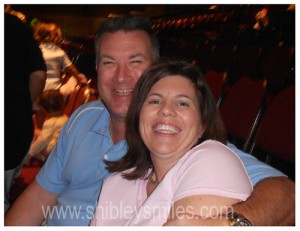 The show was awesome! Watching Honey’s face and listening to her comments as she watched the show was wonderful.  She tried hard to figure out how the magic was being performed and even gave me  her thoughts as to why something was the way that it was until the magician did something to debunk her theory.  Half way through the show she gave it up and just decided it was all “magic”.  She loved the princesses and was super excited when Belle and Jasmine appeared. She said she had been waiting for them.

Nick was disappointed we weren’t in the first row so they could select him for one of their acts. That is my attention seeking son for you. They did one magic trick that the little boy who was three that they pulled from the audience stole the show.  The magic consisted of “cleaning” his sneaker which the magician exactly burnt to a crisp.  During the course of the act the little boy was getting quite upset and wanted his shoe back.  He was telling the magician what to do, it was really quite hilarious.

Honey’s favorite part of the show was one act where they put the apprentice magician into a “masher” machine and flattened  him to shot him out of a cannon ball.  The cannon went off and the guy popped out of a target. How he managed to get from the “masher” to the target is beyond me. It amazes me how they do these tricks, it was quite entertaining. She also enjoyed clapping for “Benny” (the apprentice magician) throughout the show as he tried his hardest to magically pull apart to metal rings. 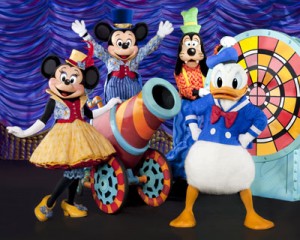 Photo taken from the internet

There was some levitation acts that were also quite astonishing and the “cut the girl” in half and put her back together act.  They had two girls one with a blue outfit and one with a red outfit. They cut them in half and mixed them up and they both popped out with mixed matched outfits on very entertaining. 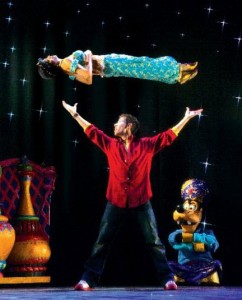 The show was very entertaining and flew by and an excellent fun family event.  Even with all the small children attending there was little crying or distractions.  All the kids were spellbound by the colors and magic. We at “Shibley Smiles” highly recommend this event for you and your family.

Disclaimer: I received a family 5 pack of tickets to attend this show by the company or representing PR agency. Opinions are my own and NOT influenced by monetary compensation. You may read more of my disclosure here.

« Happy Easter from All the Shibley Smiles!
Give Your Child the Best Teacher For Them with Kidzmet »