Home » Blog » Moments Like These Remind Me How Special Siblings Are!
As an Amazon Associate I earn from qualifying purchases.

You may have heard me mention once or twice that I have two boys. Yes those two cutie pies up there in my header, Buddy age 13 and Nick age 10. Anyone out there with two or more boys? Can you justify that life with more then one boy is not the easiest?

My boys are always competing, always arguing, always trying to out do the other or get the other in some type of trouble. Sound familiar?

Today I saw (which I knew deep down in my heart of hearts somewhere) how much they really love each other.

My oldest son called me at work crying because his head was hurting so much. His grandmother had given him some medicine and had him rest before she ran down to get the oil changed in her car for her impending Thanksgiving trip. It hurt so much though he called me. While we were talking he (sorry) threw up. He seemed to feel a little better after that, though he did ask me to come home.

I thought that once he had gotten that out of his system and he rested maybe he would feel better so I decided not to immediately come home and knowing my mother in law would be home in a little while he should be fine.

Shortly after that Nick started calling me, telling me Buddy was throwing up some more and had down so 2 more times in the span of 30 minutes. My poor oldest son was miserable and crying and my poor younger son wanted me to come home and help him. So I decided it was time for me to head home. I did call and talk to my mother in law and we both agreed it was probably the headache that was causing the stomach issues because that was really all he was complaining about, he couldn’t say enough how bad his head hurt.

I told Nick I was coming home. Of course it took me a good 15 minutes to pack up my things (to work from home) and speak with my boss. Not shortly after I left work (which is about 35 minutes form home) Nick was calling me again to ask where I was. I told him I had just left but that when I got home that Buddy needed to go into a dark bedroom, with no light or TV because the no light and noise would help his head. About 5 minutes from the house he called me and told me to be REAL quiet when I got home because Buddy had finally fallen asleep.

When I did get home he rushed to the door to “shhh” me and told me he had woken up his brother to move him to my bedroom because it was darker and the further away from the noise. Can I just say I’m almost in tears writing this to see such love from my son? He was so concerned for his brother and wanted to help him so he listened to what I was going to do and took it upon himself to help him out.

When Buddy did wake up about 15 minutes ago he was feeling much better, and gave Nick a huge hug and told him thank you for taking care of him and told him he loved him very much! 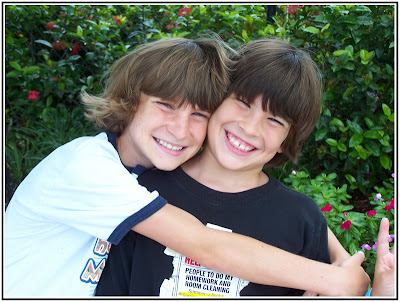 « Wordless Wednesday ~ And You Thought YOU Had a Bad Hair Day!
Voda Swim Review and Customer Testimonial »