Home » Lifestyle » Everything Else » Monster High Freaky Fusion Right in Time for Halloween
As an Amazon Associate I earn from qualifying purchases.

My daughter is NOT the Barbie doll type. She never liked princesses and she would rather fill her room with peace signs and rock n’ roll then flowers and frills. This is one of many things that I love about her. I love her personality and her individuality. So it was no surprise to me when she feel in love with the Monster High line. It is still girly but with an edge. No frilly dresses but instead fun funky clothing and unique characters. Monster High has done it again and come out with a few new characters called Monster High Freaky Fusion! 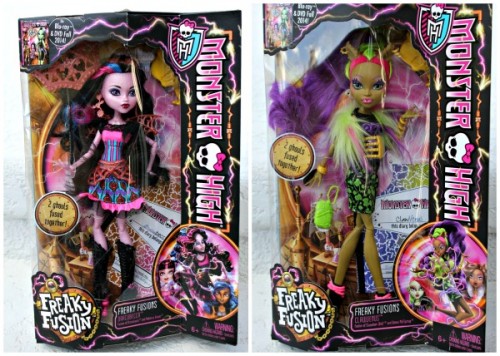 My daughter new a doll was coming and she couldn’t wait. She kept asking me what day was it going to be here. When they did arrive she immediately text me on the phone and told me she thought the big box at home was her dolls and could she open it. I was pulling into the driveway at the time so she didn’t have to wait to long. 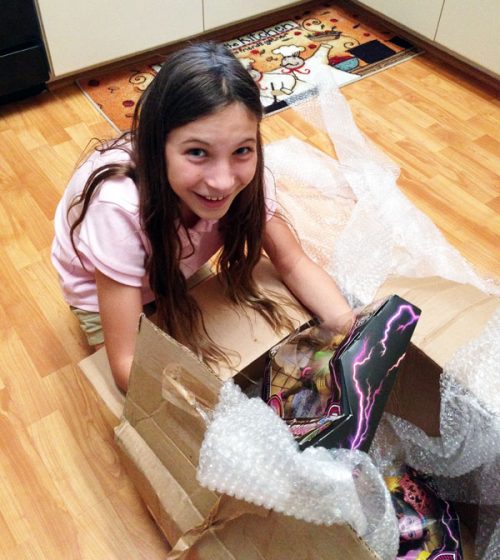 So what is a Freaky Fusion? It is not a drink, or at least I don’t think it is LOL!

The Monster High® Freaky Fusion™ ghouls go deep into the catacombs of Monster High to help Frankie look for clues about her past and learn more about her family scaritage. There, they inadvertently set off a time machine that takes them back to the year 1814 where they meet Sparky, a misguided, teen scientist obsessed with the creation of life. Sparky follows Frankie back to modern day Monster High, causing a lab accident in which eight ghouls fuse into four new monsters! Visit Walmart.com to get all the latest Freaky Fusion™ ghouls.

My daughter was very excited when she say she received Dracubecca™: because she has Robecca Steam® which is one of the dolls that was used to make this Freaky Fusion. The torn into the boxes and first thing she said was she loved that they came with their own stand. She likes to take photos of her dolls and do some you tube videos and the stands help out a lot. The next thing she noticed was the detail of the dolls. She loved the ears on Clawvenus™ and the dots on Dracubecca™ 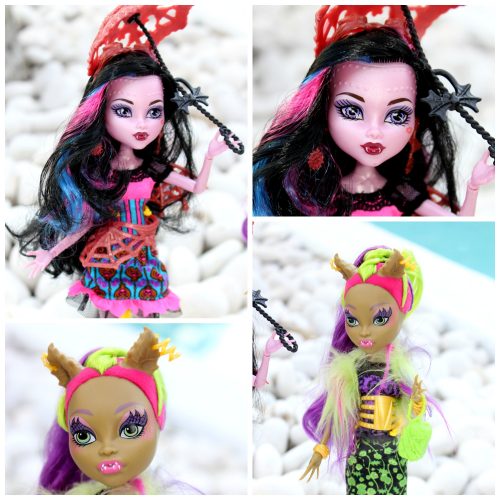 Clawvenus™: Made up of Clawdeen Wolf® and Venus Mc Flytrap® – Clawvenus™ is fiercely “fusionable” and ferociously beautiful, but she may need to change her shampoo to a weed-and-feed formula.

Cleolei™ (Pronounced “Cleo-Lie”): Fusing the Mummy heritage of Cleo de Nile® with the werecat ancestry of Toralei®, Cleolei™ has some ferocious issues, but it’s nothing a quick little cat-nap won’t fix.

Dracubecca™: Mixing the Vampire heritage of Draculaura® with the Mad Scientist ancestry of Robecca Steam®, Dracubecca™ is scary sweet but still attached to rocket-powered boots.

Lagoonafire™: Fusing the Sea Monster heritage of Lagoona Blue® with the Chinese Dragon ancestry of Jinafire Long™ Lagoonafire™ loves to surf and swim like she’s on fire — literally!

Which ghoulfriend are you more like? Cleo de Nile® or Toralei®? Draculaura® or Robecca Steam®? Lagoona Blue® or Jinafire Long™? Clawdeen Wolf ®or Venus Mc Flytrap®?

Find out by taking the fun quiz on the Monster High® Freaky Fusion™ page. By choosing between “this” or “that” picture, you and your little ghoul can find out your Freaky Fusion™ percentage.

I have a feeling the other two dolls will be on Honey’s Christmas List, or her birthday list since it is in a couple months. There is also the cool catacombs. Explore the creepy cool and spooky surroundings of the Monster High® Catacombs! Fang out with all your fave ghouls in this monstrous 3’ x 4’ play set packed with clawesome transformative features and secret surprises.

Grab a great Coupon and start saving and stocking up on Christmas today : Freaky Fusion Coupon

This post is sponsored by Lunchbox. All opinions are my own.