Home » Lifestyle » Entertainment » Movies » Muppet Mania : Statler and Waldorf’s Guide to Going to the Movies
As an Amazon Associate I earn from qualifying purchases. 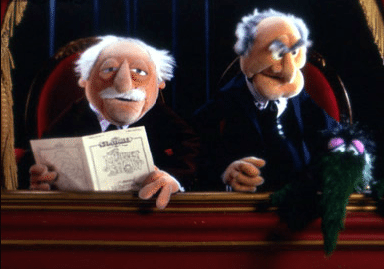 STATLER & WALDORF’S
GUIDE TO GOING TO THE MOVIES

With Disney’s “The Muppets” coming out in theaters soon, Statler and Waldorf offer unsolicited advice and a whole lot of laughs about what to watch for at the theater.

STATLER:     When going to see a movie starring the Muppets, always get a good seat…
WALDORF:    …one that doesn’t face the screen!

WALDORF:    If you arrive late for your movie, stick around…
STATLER:    …they’ll be releasing a sequel soon!

STATLER:    Never get a bucket of popcorn that’s larger than your car.

WALDORF:    Don’t talk on your cell phone during the movie….
STATLER:    …it might wake us up!

WALDORF:    If you have to explain everything in the movie to the person you’re sitting next to…
STATLER:    …welcome to my world.

WALDORF:    Sometimes the movie is not out of focus—you are.

WALDORF:    If you don’t have anything nice to say about a movie…
STATLER:    …sit next to us!

STATLER:    Spoiler Alert—The Muppets are in Disney’s “The Muppets.”
WALDORF:    Don’t say you haven’t been warned.

To see Statler and Waldorf in the balcony (where they belong), check out http://disney.go.com/muppets/portfolio/homepage.html

ABOUT THE MOVIE
On vacation in Los Angeles, Walter, the world’s biggest Muppet fan, his brother Gary (Jason Segel) and Gary’s girlfriend Mary (Amy Adams) from Smalltown, USA, discover the nefarious plan of oilman Tex Richman (Chris Cooper) to raze the Muppet Theater and drill for the oil recently discovered beneath the Muppets’ former stomping grounds. To stage a telethon and raise the $10 million needed to save the theater, Walter, Mary and Gary help Kermit reunite the Muppets, who have all gone their separate ways: Fozzie now performs with a Reno casino tribute band called the Moopets, Miss Piggy is a plus-size fashion editor at Vogue Paris, Animal is in a Santa Barbara clinic for anger management, and Gonzo is a high-powered plumbing magnate. With secret, signature, celebrity cameos, Disney’s “The Muppets” hits the big screen Nov. 23, 2011.